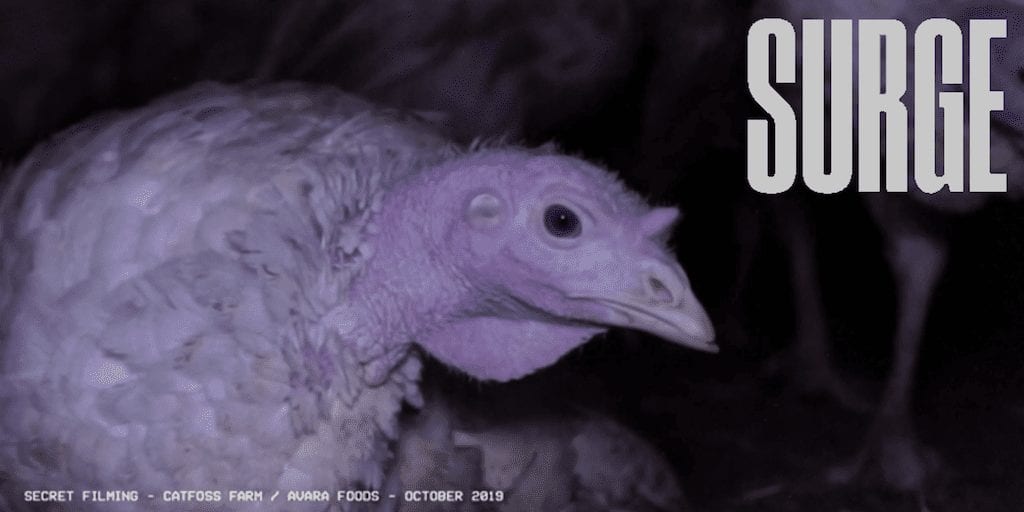 The Nightmare Before Christmas is narrated by vegan actress and activist Evanna Lynch. “The simple fact is that the only way to absolutely guarantee the welfare of any non-human animal is to not raise them for us to use and abuse,” the Harry Potter actress said.

In moments where gas stunning was shown to be ineffective, turkeys had their throats cut whilst still flapping their wings.

In other scenes, turkeys were forced into traffic cones where they then bled to death. Further footage from visits to Grove Smith Turkeys by investigators shows body parts left on the kill room floor or still hanging on machinery.

Grove Smith Farms was the subject of a separate exposé from Animal Equality released in December 2018 where turkeys were seen to be cannibalising one another, which prompted national press coverage and investigations by the RSPCA, APHA and Essex Trading Standards, as well as the suspension of orders from one of the company’s main customers.

In November 2018, Surge revealed ‘disgraceful conditions’ in sheds at an Avara-operated facility in Sudbrooke, Lincolnshire, which resulted in national press coverage.

At the time, Avara was reported to supply Asda, Morrisons and Sainsbury’s.

“If you would like to support our work at Surge, you can become a Surge supporter today. Donations keep Surge operations and investigations going, and however small your donation may be, any help you are able to offer Surge is hugely appreciated and keeps us going.”

Share this article to reveal the truth behind the turkey industry.