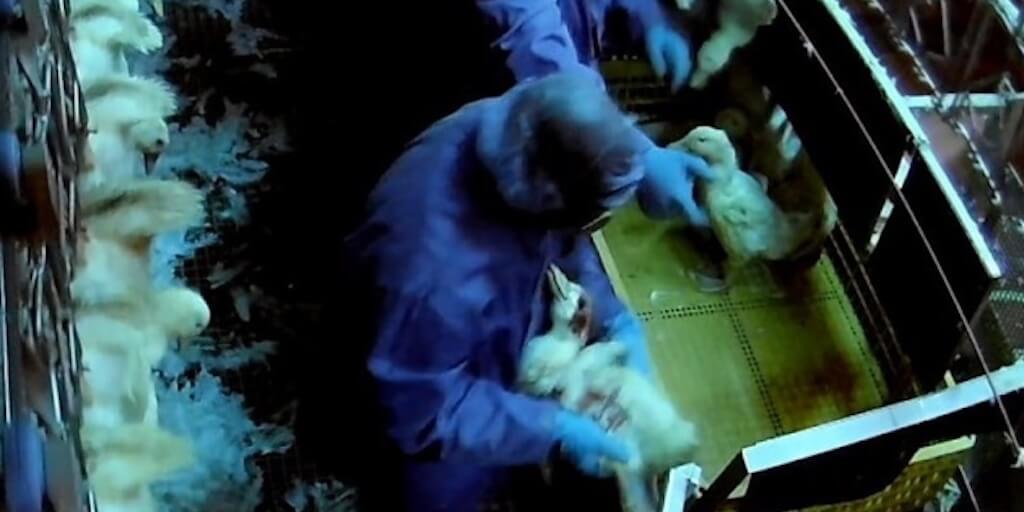 Undercover footage of a duck slaughterhouse in the UK shows the ‘harsh reality’ of birds suffering for the meat industry.

The video released by Animal Justice Project (AJP), was shot inside the slaughterhouse of Gressingham Duck – the largest supplier of ducks to UK supermarkets.

AJP investigators said they captured a “catalogue of disaster” footage at the Suffolk-based slaughterhouse.

According to AJP, workers grabbed ducks roughly from crates, hung them upside down before sending them along the shackle line into an electrical water bath.

While both live-shackling and electrical water bath practices are condemned by the European Food Safety Authority (EFSA), the pressure group claimed the birds were also left hanging for longer than the two minutes specified in both UK and EU legislation.

Despite the animal welfare violations, AJP added that Red Tractor is unethically approving the practices inside the slaughterhouse.

“This unnatural position exerts ­considerable force on bones and soft tissues of legs and feet. This can and does result in fractures and other ­injuries, and is extremely stressful.

“It is an inhumane way to treat birds of any species. No ­organisation should be certifying practices that are inhumane.”

In certain shots, workers could be heard yelling heatedly at one another while brutalising and rough-handling the animals, ramming them with force into the shackles, causing extra pain and misery to the distressed birds.

Claire Palmer, Animal Justice Project spokeswoman, added: “It is a catalogue of disaster. ­Gressingham is utilising practices well known to be inhumane, even by the Government’s own animal welfare council.

“Most water that Gressingham ducks will experience is when they hit the electric water bath inside this slaughterhouse.

“Subjected to ­terrifying and brutal handling by workers who scream at each other, and ­shackling whilst fully conscious, follows a dismal life for ducks inside filthy, barren sheds.

“Consumers need to know their choices in the run-up to Christmas and beyond can have a huge impact on animals’ lives.

“We urge them to have a truly compassionate Christmas.”

The footage has prompted an investigation from several supermarkets and governing bodies including Food assurance scheme Red Tractor. The Food Standards Agency (FSA) has also demanded CCTV footage from inside the Gressingham slaughterhouse, over the reported animal cruelty and suffering.

Refuting the claims, Gressingham Foods said: “The majority of footage shows processes that are indicative of a well-run, high welfare poultry processing plant.

“There is no clear evidence of abuse or neglect by staff.

“There are actions not representative of the high standards expected of our factory, they will be fully ­investigated in conjunction with external auditors and appropriate actions taken. The welfare of our birds is an absolute priority.”

It added: “We work to the highest standards in hygiene, biosecurity and animal welfare across our factories and farms. All staff responsible for the welfare of our birds have the necessary training with regular updates for continuous improvement.”