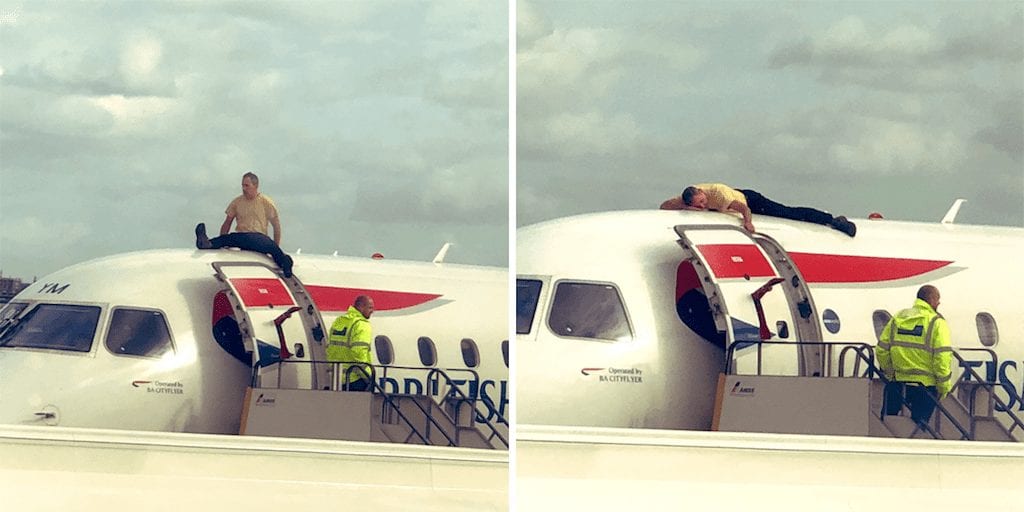 An Extinction Rebellion activist glued himself to a British Airways flight to protest against climate change.

The man, revealed as Paralympic cyclist James Brown, mounted a plane at London City Airport, and a video was live streamed by the group yesterday (11 October).

A spokesman for the Met Police described his actions as ‘reckless, stupid and dangerous’, but climate activists celebrated the move which aimed to draw attention to the impact of air travel on global warming.

“We’re protesting against government inaction on climate and ecological breakdown.”

Paralympic medallist James Brown has climbed on top of a plane at London City Airport as part of the Extinction Rebellion protests.

Activists staged a sit-in at the terminal building of the airport and one protester was seen in a video boarding a plane and preventing it from taking off.

An Extinction Rebellion protester managed to board a plane at London City Airport.@XRebellionUK | #ExtinctionRebellion pic.twitter.com/uSvz2Fwv5l

More than 1,100 arrests have been made so far in protests across London as part of global climate strikes which are expected to last for two weeks.

Benedict Cumerbatch joined Extinction Rebellion protests in London earlier this week to lend his support for action over the climate crisis.

The vegan actor was pictured at Trafalgar Square where activists have set up tents as protests continue for two weeks.

“Power to the people!”

The actor’s appearance was celebrated by activists and social media users, with one writing: “When Sherlock has joined the rebellion we know the game is afoot.”

Extinction Rebellion’s protests have brought London to a standstill as activists blocked off roads, bridges and meat markets this week.

The group’s dedicated animal rights section camped out at London’s largest meat market, Smithfield, to protest against the meat industry.

Animal Rebellion activists blockaded the market and filled the usual meat stalls with fruit and vegetables to support the message that ‘beef is grief’.

But not everyone was a fan of the protests, including Prime Minister Boris Johnson who described the activists as ‘crusties’ and ‘importunate nose-ringed climate change protesters’.

Others took to social media to vent their frustration with the disruption caused by protesters.

But environmentalists responded by condemning the negative reaction to the protests, arguing that saving the planet is more important than inconvenience.

What do you think of Extinction Rebellion’s protests? Share your thoughts in the comments section below!