Famous YouTuber blasted for hitting, shoving and spitting on her pet dog in video post 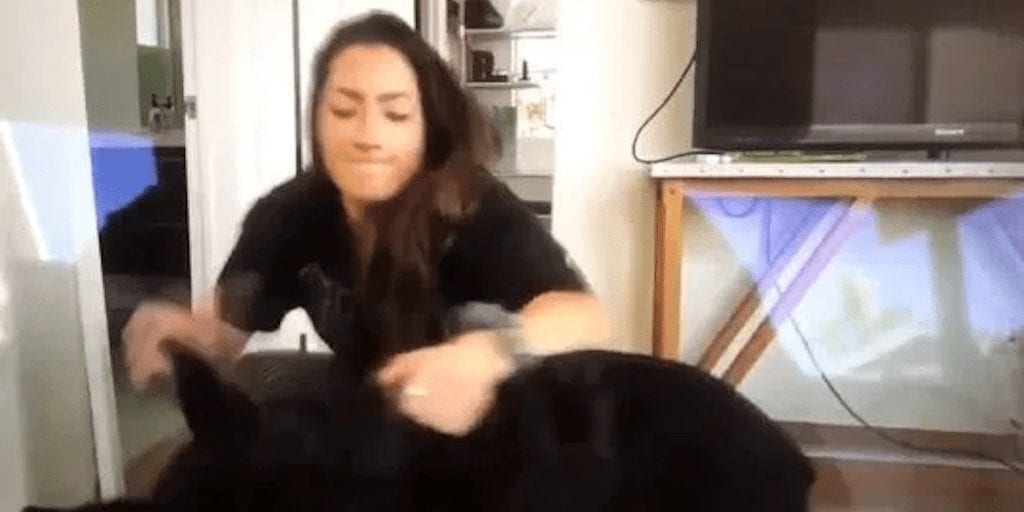 Famous YouTuber Brooke Houts has been labelled an ‘animal abuser’ after she accidentally posted footage of herself hitting, shoving and spitting on her pet Doberman.

Houts briefly posted the disturbing treatment of her dog Sphinx on her YouTube channel, but didn’t delete the footage before it was shared far and wide on Twitter.

The 20-year-old is seen shouting ‘No!’ at her pet before hitting him in the face, pinning him down and appearing to spit on him.

Later when Sphinx tries to lick her, she pushes his face aggressively with both hands.

The YouTuber, who has 300,000 followers, later uploaded a separate video titled ‘plastic wrap prank on my doberman!’ but this omitting the upsetting section.

Viewers slammed Houts in the aftermath of the upload, with famous YouTuber Logan Paul describing it as ‘remarkably grotesque’.

“Discipline your animals should they misbehave. i get it. but despite the hitting, the spitting is a totally unwarranted, inappropriate, and vile display of energy that makes this woman completely unfit to own that dog,” he said.

Other viewers condemned her behaviour.

After the angry backlash, Houts posted a lengthy apology insisting she is ‘not a dog abuser’.

“Anything I say isn’t going to make those who believe I’m a bad person stop believing that, and I’m aware of this,” she wrote.

“I apologize to anyone who has been effected (sic) negatively by the footage. First off, I want to address the uncut footage,” she said.

“On the day in particular that the video was filmed, and actually this past week, things in my outside life have been less than exceptional. I am not going to play the “victim card” or anything of that sort, but I do want to point out that I am rarely as upset as what was shown in the footage.

“The bubbly, happy-go-lucky Brooke that you often see in my videos is typically an accurate representation of me, but it’s obvious that I’m playing up my mood in this video when I’m clearly actually frustrated. That being said, this does NOT justify me yelling at my dog in the way that I did, and I’m fully aware of that.

“Should I have gotten as angry as I did in the video? No. Should I have raised my voice and yelled at him? No. However, when my 75 lb. Doberman is jumping up in my face with his mouth open, I do, as a dog parent, have to show him that this behavior is unacceptable.

“But I want to make it known, REGARDLESS of what my dog does, I should not have acted that way towards him.

“I want to clarify that I am NOT a dog abuser or animal abuser in any way, shape, or form. Anyone who has witnessed or heard true animal abuse will be able to clearly see that.”

She also explains she’s sure her pet was not hurt by her actions.

“I also did NOT spit on my dog, but I understand how it could look like I did. Did I get in his face and take unnecessary actions towards him? Yes I did, and that was not the way I should’ve handled the situation. Did I spit on my dog? No,” she added.

What do you think of Brooke Houts’ apology? Share your thoughts in the comments below!