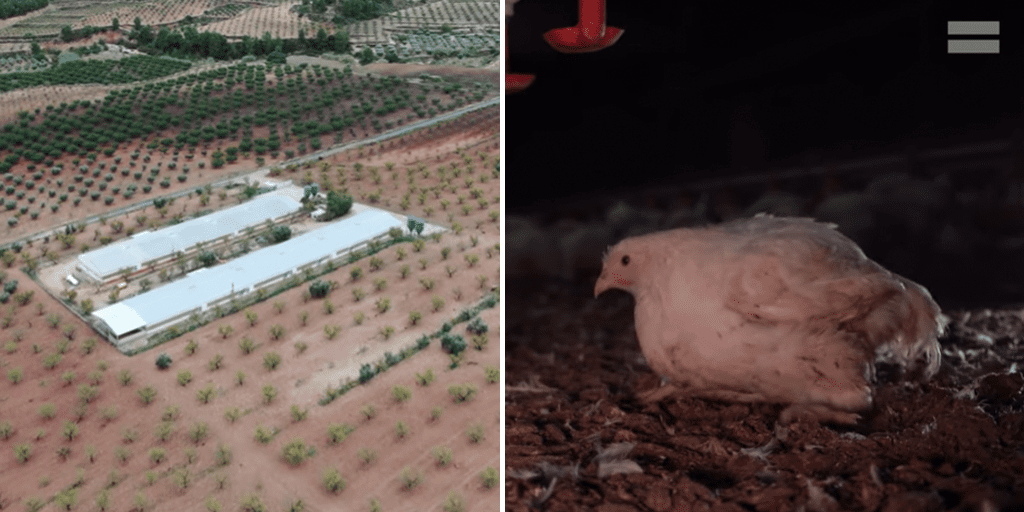 Animal rights activists have released footage taken at a Spanish chicken farm where chickens have been bred to be so overweight they can barely move.

Welfare group Equalia released the footage and explained that the slaughterhouse has pumped birds full of antibiotics and used selective breeding to speed up their growth.

Disturbing footage reveals chickens on their backs struggling to breathe as a result of the breeding process.

The undercover footage was taken at four separate farms in Spain in recent months.

Warning: The below footage contains shocking imagery which some viewers may find distressing

Activists estimated the chickens weighed more than 2.2kg as due to the farms’ methods and the chickens are clearly unable to carry their own weight.

Equalia explained that the lack of movement has led to a range of physical issues such as broken feet, dermatitis and heart and lung issues. The birds, who live in dark dungeon-like barns, also are forced to live in their own faeces.

The businesses also gave all chickens antibiotics to protect them from illness and increase profits in the meat industry.

The chickens were bred over 41 days, and Equialia said that the industry should ensure birds are raised for 56 days to reduce the damage to their health.

Spokeswoman for Equalia Maria Villaluenga said in a statement: “This research wants to give visibility to a problem that is very important for producers and customers.

“With our new campaign, we want to help the industry take a step toward a model of production which understands animal welfare as a business opportunity, not as an obstacle.

“A product of better quality does not mean an economic effort on the part of customers.

“We pay for better quality meat with our health, the health of the animals and the environment.”