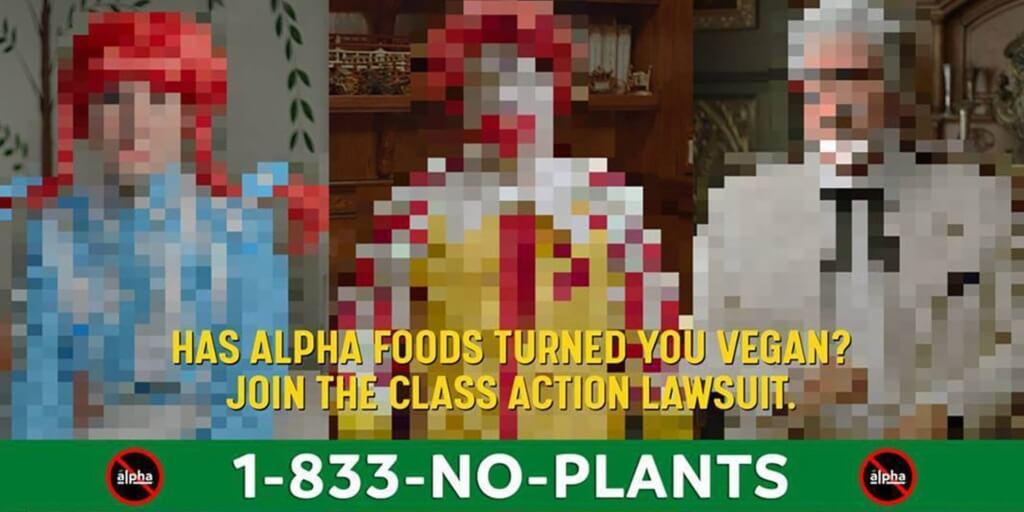 Mascots of major fast-food giants have filed a lawsuit against a major vegan brand.

According to Colonel Sanders (KFC), Ronald McDonald (McDonald’s), and Wendy (Wendy)’s, California based Alpha Foods tricked them into thinking its vegan chicken and meat alternatives are the real thing.

The mascots are now seeking compensation because Alpha Foods’ products have inadvertently turned them into vegans.

This is all part of the plant-based company’s newest campaign to promote its plant-based product and mock meat-eaters.

In the commercial, a “lawyer” asks: “Did you unknowingly become vegan because of Alpha Foods’ plant-based products that taste too good to be true?”

The commercial then shifts to a blurred-out Colonel Sanders, who says: “After I started eating chicken nuggets from Alpha Foods, I couldn’t help myself. I was hooked.”

A hazy Ronald McDonald adds: “I got duped into becoming vegan and it makes me sad. It’s my job to be happy. So I’m suing for lost wages.”

Blurred-out Wendy complains: “Thanks to Alpha Foods I’m vegan now and my family is going to disown me.”

“Help me hammer Alpha Foods so bad that no one will ever again be victimized by a plant or any number of plants,” the lawyer continues.

‘Never been a better time’

With the new campaign the company is looking to target those meat-eaters and flexitarians who are reluctant to ditch meat for flavor and texture. Its aims to make sustainable food alternatives options available to everyone.

Alpha Foods declares that its alternative meat products are what “a meat-eater eats when a meat-eater doesn’t eat meat.”

Kierstin De West is Alpha’s chief marketing officer. She said: “You don’t have to change your entire diet and personality when you try plant-based—just change up what you eat on a Wednesday night.

“As the flexitarian movement grows, there’s never been a better time to try something new that’s good for your body—it’s all the benefits without the sacrifice.”

As part of promotions, consumers who join the fictional class-action suit by calling 1-833-NO-PLANTS or register at the Alpha Foods website will in turn earn a free Alpha Foods burrito or a $1 coupon for any Alpha Foods product from its website.

Alpha Foods was founded by Cole Orobetz and Loren Wallis in 2015.

“In addition, an important element part of our mission is to support global benefits of animal welfare, sustainability, and overall health tied to the plant-based industry.”

Moreover, its products are widely available at more than 9,000 stores in the US.

The latest breakfast offerings are protein rich and are said to be “perfect for quick mornings on the go”.

They come after the company raised $28 million in new funding last year, adding to the $7 million investment round it closed in March 2019.