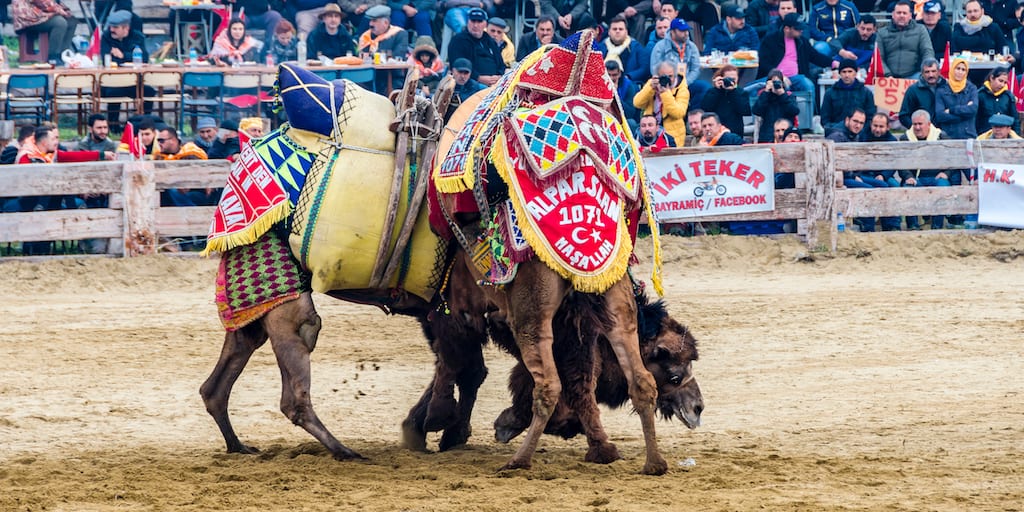 Festivals today are held mostly in Western Turkey, and feature camels who have been kept in barns and then transported to the festival by truck.

They’re dressed up in colourful outfits and crowds go wild as they fight by smashing their heads and necks together until one is injured or concedes the fight and runs away. Rules dictate that if a camel falls, screams, or retreats then it loses the fight.

The festival features singing and dancing, and controversially visitors can buy camel meat from local vendors.

Animal rights activists have criticised the event, claiming the breeders and owners of the camels create an unnatural environment for the animals and accuse the festival of forcing the camels to fight.

The events have roots in nomadic culture – when camels were used for transportation – and organisers claim the fights are natural and simply a mating ritual.

A documentary from the Washington Post revealed shocking scenes at the festival where camels are herded together inside a stadium.

“Of course, when watched from the outside, it appears that the animals are torturing each other,” a participant says.

“But this is far from true,” he claims.

Activists are unsatisfied with the organisers’ claims, and say the event causes extreme distress for the camels.

The camel owners argue that the fighting is a natural part of the camels’ lives, and say the camels would behave like this regardless of the festival.

The camel wrestling festivals take place on a regular basis throughout the year at various towns and villages.

Activists celebrated a small victory against the festivals this month as many of this year’s events were cancelled due to the coronavirus outbreak.

Share this article to reveal the brutality behind camel fighting.