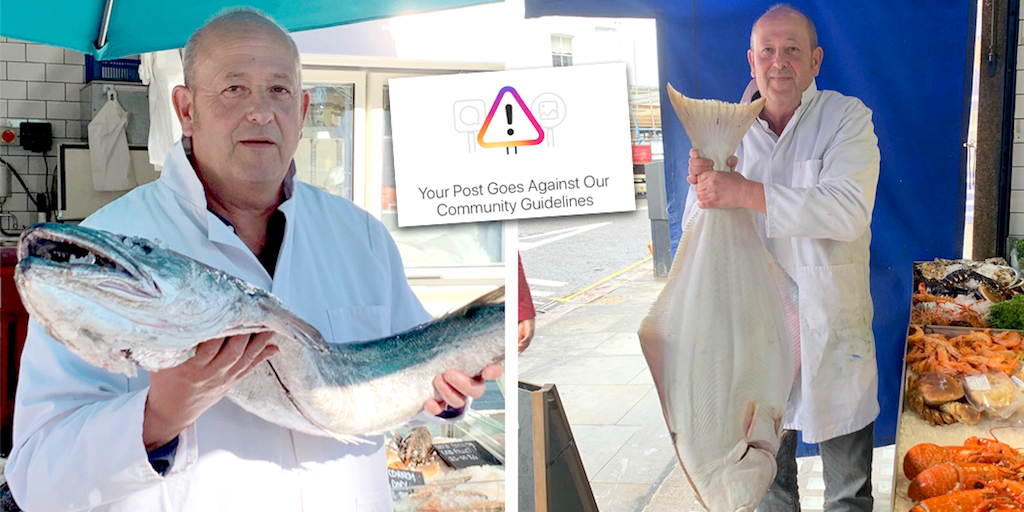 A fishmonger has reacted with fury after Instagram blurred his posts displaying dead fish, labelling the posts ‘offensive material’.

Rex Goldsmith, who owns The Chelsea Fishmonger in London, was surprised when Instagram flagged his photos and videos of raw fish corpses for the second time in two weeks.

He speculated that a ‘vegan warrior’ might have reported him and be to blame for the censored posts.

“It’s ridiculous. I don’t know whether the post was reported by vegans or whether Instagram censored it as they thought it would be offensive to vegans,” Goldsmith reacted.

“If they’re going to pick on me, why don’t they pick on one of the big companies who use the methods of farming that are bad for the environment and fish welfare?”

The Vegan Society pointed out that it was unlikely to have been reported by vegans, as someone who cut animal products out of their diet would have no reason to follow a fishmonger.

Vegans have also reacted by pointing out that it shouldn’t be surprising that images of a dead animal could be considered ‘disturbing’.

But Goldsmith disagreed with the label. Speaking to the BBC, he said: “I totally understand censorship – but when you think that Instagram is owned by Facebook, and if you look at some of the videos on Facebook, they are disgusting – some are violent, some have foul language – I find it a bit bizarre that they can then think a bit of cod fillet is offensive.”

He explained that he knew some butchers who had their posts censored but was astonished with Instagram’s hardline attitude towards his photos.

“Instagram is a shop window for us business people who put stuff on it,” he continued.

“I can put a video or photo up of a particular fish, and I’ll often get direct messages or phone calls saying ‘save one for me’ – it’s a good connector.

“I have nothing against people who choose not to eat meat or fish, but it’s my little business and I am precious about it.”

After Goldsmith complained to Instagram, the company said the material was flagged by mistake. Parent company Facebook said in a statement: “This content was marked as sensitive in error and has now been reinstated. We apologize for the mistake.”

Should a dead fish be considered ‘offensive or disturbing’ imagery? Share your thoughts in the comments below!