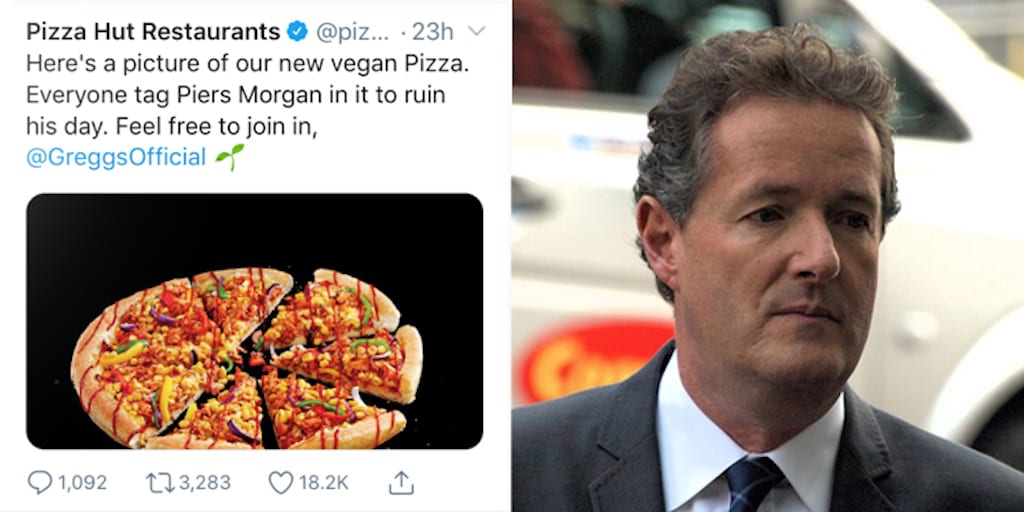 Following his outrage at the Greggs vegan sausage roll, it’s becoming customary for food businesses to troll Piers Morgan whenever they bring out a new vegan product.

It all started with the Good Morning Britain host’s bizarre, but far from unexpected, outburst at UK-based bakery Greggs for launching a vegan version of its sausage roll.

Morgan was far from impressed, and immediately went on the offensive.

But Greggs was feeling pretty sassy, and put Morgan in his place with a witty comeback.

Morgan was irate the following morning, and was in a typically sour mood.

But so popular was the bakery chain’s comeback, which has now been liked nearly 150k times on Twitter, that other big businesses have followed suit.

McDonalds was the first in on the action after Morgan complained about the vegetarian Happy Meal.

And then Pizza Hut continued the trend, asking its followers to tag the anti-vegan TV host on an image of the company’s new vegan pizza.

UK TV show Have I Got News For You also pointed out the hypocrisy of Piers’ recent behaviour.

And vegans are taking the opportunity to joke about the recent outrage about Greggs’ sausage roll.

What do you think on Piers Morgan’s latest outburst? Tell us in the comments below!