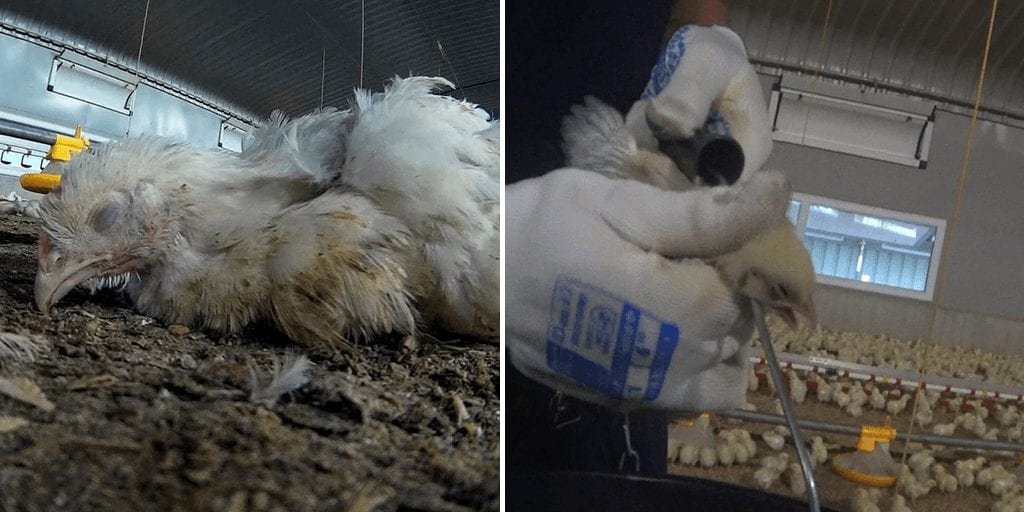 ‘The abuses we found are horrific and this unchecked cruelty must come to an end.’

All the farms in question are Red Tractor certified and operated by Moy Park – one of Europe’s 10 biggest poultry producers.

Chicken from these farms are supplied to McDonald’s, Tesco and Ocado among other outlets.

The secret filming done by an undercover activist for animal protection organisation Animal Equality captured horrible and ‘distressing footage,’ which included chickens being deprived of water as workers raised the drinking troughs to a height where young chicks were unable to reach. In certain shots workers were seen painfully crushing the ‘unprofitable’ chicks’ necks in their hands.

In addition, some chickens were seen with raw skin burns on their feet and chests from filthy, urine-soaked floors and crammed into immensely overcrowded barns, barely able to move or stretch their wings.

The footage revealed that chickens in such farms are bred to grow so big in an extremely short span of time that they suffer from excruciating leg injuries and are unable to carry the weight of their own oversized bodies and as a result hundred suffer agonizing deaths each day.

The filming took place in two parts in late 2019 and was passed on to Defra’s Animal and Plant Health Agency, the RSPCA and Red Tractor in early 2020.

Poultry accounts for half the meat eaten in the UK, and Moy Park is known to raise and kill more than 312 million birds each year.

Upon reviewing the footage, the poultry processor said it had implemented measures to ensure standards were adhered to, “including refreshed training manuals, and upgraded face-to-face and online training”.

A Moy Park spokesperson said: “Any breach is completely unacceptable and would result in immediate corrective actions. This particular footage is edited with an agenda in mind, and we are confident that it is not reflective of the high standards and certified practices upheld across our wider farming community.”

“A robust assessment of the farms and a review of the footage by an experienced veterinary surgeon specialising in poultry found that despite the examples highlighted, the overall flocks are displaying natural behaviours and appear in good health in most of the footage,” the spokesperson added.

“The farms featured have also been investigated thoroughly by local authorities and regulators and no major breaches were identified.”

A Red Tractor spokesperson said: “We take animal welfare very seriously. All the farms in the footage were investigated by us and stakeholder partners including their vet, the APHA and trading standards to ensure there was a comprehensive account of farm practices.

“No evidence was found of breaches to legal requirements or Red Tractor standards.”

While Moy Park and Red Tractor denied animal violations, Sharon Núñez, President of Animal Equality said: “The abuses we found on Moy Park’s farms are horrific and this unchecked cruelty must come to an end.”

Penny added: “Moy Park’s actions are consistently underpinned by profit; this is a company that spends an eye-watering £700,000 on a CEO salary, yet instructs workers to kill vulnerable chicks. Moy Park’s greed is unrelenting.”

She added: “McDonald’s, Tesco, Ocado and others buying from this supplier are refusing to show even the smallest ounce of mercy to these innocent chickens. Consumers appalled by these practices can try vegan and do better by chickens today.”

Animal Equality is also calling on McDonald’s to eliminate some of the worst abuses for the chickens in its supply chain and sign on the Better Chicken Commitment.

You can Sign Animal Equality’s petition to McDonald’s here.

Share this story to reveal the animal abuse rampant in factory farming.