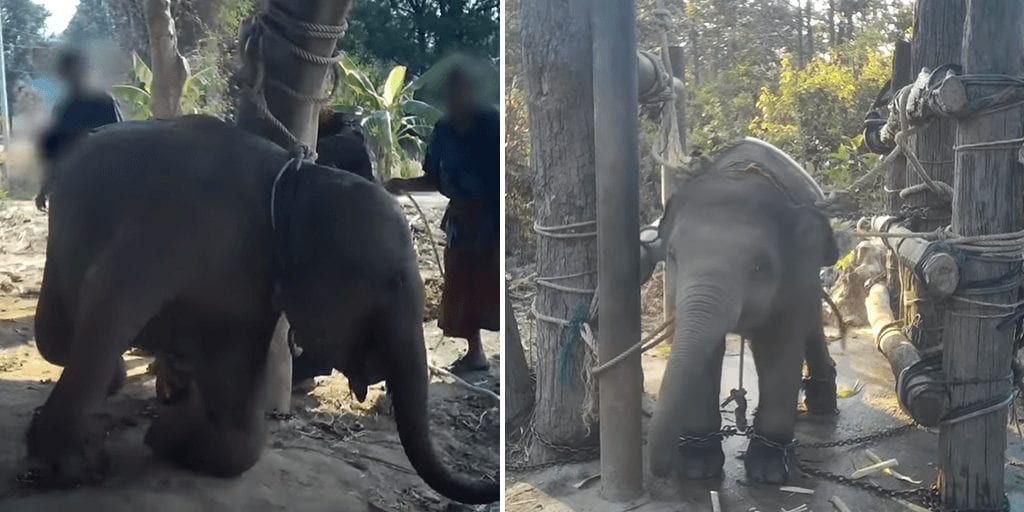 Compiled by Animal rights group World Animal Protection (WAP), the exposé highlights the pitiful plight of baby elephants, who are forcibly separated from their mothers, brutally confined in isolated chambers, and inflicted with physical and mental trauma.

The clips, which contain footage filmed secretly at several camps at undisclosed locations between December 2018 and January 2020, show animal handlers abusing the calves before they are taught to paint, spin hoops, carry passengers and stand on their hind legs for the entertainment of vacationers.

One part of the investigation followed a mother named Gintaala and her 16-month-old baby Boonshoo, who was being ‘broken’ into submission by the staff.

The clip showed the baby elephant being initially tied to its mother before the mahouts forcibly separated them and chained Boonshoo up alone in a chamber.

The terrified calf wailed in distress as she was then barbarically forced to follow commands.

The tamers were also seen repeatedly beating the calf with a bullhook, which the investigators describe to be a means of instilling pain and fear as well as destroying the animal’s natural instincts.

The group also shared footage of how a baby elephant collapsed after struggling to walk in the sun’s heat but was forced to get back to its feet despite the fatigue after being threatened by one of the workers.

One video captured at the Maesa Elephant Nursery in Thailand, where baby elephants are separated from their mothers when they are just two years old, showed tourists watching animals seemingly bathing in the water, but workers could be seen using sharp metal bullhooks to control the animals – which had chains around their necks.

Joe Aphiluck, WAP Thailand’s Public Engagement Manager, said: “Tourist demand is a key driver of these atrocities, while the complexity and lack of modernity of the many Thai elephant laws make the safeguarding of elephants’ welfare more difficult.

“There is still a lot of work to do to end the abuse of elephants.”

Audrey Mealia, Global Head of Wildlife at World Animal Protection, added: “We are at a turning point when it comes to our relationship with wild animals.

“For too long, these intelligent, sociable, creatures have been the victims of a cruel trade that rips baby elephants from their mothers and family groups. In the wild, mother, daughter and granddaughter elephants spend their entire lives together.

“We want to expose the extent of the true suffering these animals endure – a lifetime of horror for that ‘once in a lifetime’ holiday experience.

“The tourism industry has come to a halt in the wake of COVID-19 but it will re-build – this is the ideal opportunity to build a better future.”

Share this story to reveal the truth behind elephant tourism.