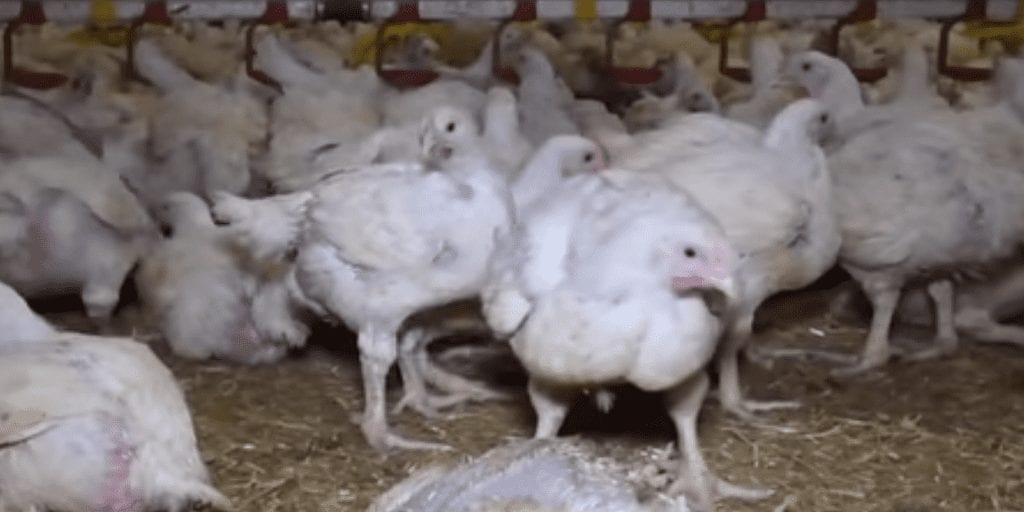 A huge chicken producer which supplies almost a third of all poultry to retailers across the UK has been exposed for housing birds in horrific conditions.

Moy Park supplies an estimated 30% of the poultry market in the UK and is certified by Red Tractor as an ‘ethical’ farm, but undercover footage has revealed birds struggling to breathe in dense crowds, many of which are left dead among living chickens.

The farms supply Tesco, Sainsbury’s and Ocado among many other suppliers. The supermarkets have revealed they are investigating the footage and assessing their supply chains.

The footage from Animal Equality at Saltbox, Ladywath and Mount farms, all owned by Moy Park, shows dead animals ‘left to rot’ while others are crammed together alongside their corpses.

Some chicks as young as a few days old are seen dead in the video and some animals cannot move due to horrific leg injuries.

The Guardian has revealed that the farms were under investigation by Red Tractor before the footage was released.

A spokesperson for Red Tractor told the Guardian: “High animal welfare is one of our top priorities. Our own routine auditing of these farms had identified some breaches to our high standards, and we have been working with them to ensure they put the necessary processes in place for them to remain Red Tractor certified.”

Animal Equality’s UK director, Toni Vernelli, said in a statement: “On every visit made to these overcrowded sheds, our investigators discovered severely lame birds collapsing under the weight of their abnormally large bodies. Unnatural conditions are standard on British chicken farms.”