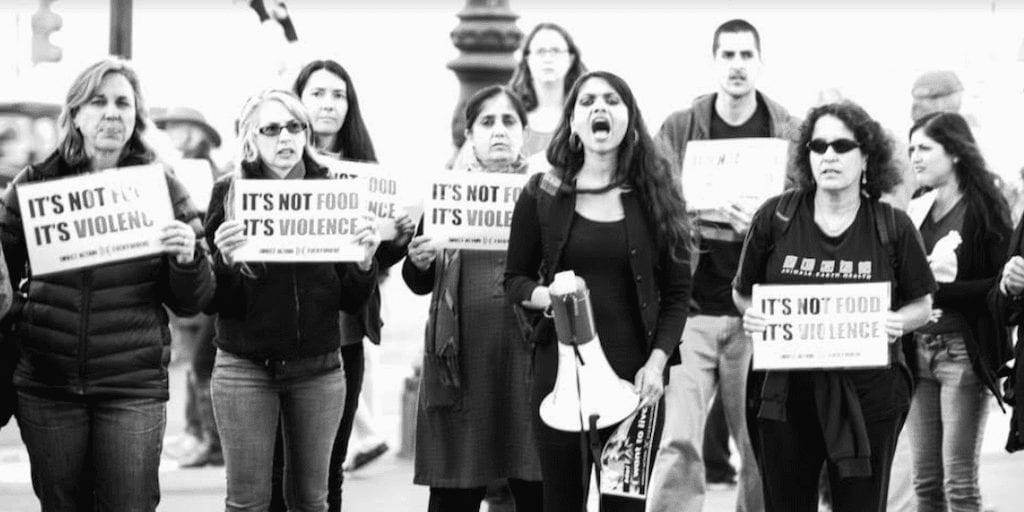 Infamous global animal rights activist group Direct Action Everywhere (DxE) has been increasingly in the spotlight in recent months. Their bold approach to protesting – displaying graphic images in steakhouses and chanting anti-meat industry slogans in supermarkets – is admired by some and scorned by others.

The group’s methods are hotly debated even within the vegan community – is radical, invasive action necessary to change societal norms, or does a softer approach encourage more people to convert?

Totally Vegan Buzz caught up with DxE’s co-founder, Priya Sawhney, to find out the theory behind the group’s tactics.

Sawhney was at the centre of DxE at its birth in San Francisco in 2013, and now the ‘animal liberation’ group spans across 225 countries in 43 cities.

Since its creation Sawhney has organised many ‘radical protests’.

“We are not afraid to enter a grocery store or a steakhouse in a group and chant there, loudly and boldly telling customers that ‘meat is murder’,” she explained.

Though many find DxE’s methods shocking, they are based around the power of words, non-violent resistance, grassroots organisation and civil disobedience.

“We protest differently from most other animal rights groups because we follow a model of achieving social change practised by Mahatma Gandhi and Dr. Martin Luther King, Jr.,” she said.

The activists display easily recognisable signs during their ‘disruptions’, and are often led by a member preaching pro-vegan messages over a megaphone.

Sawhney continued: “We enter establishments and protest confidently because we know that we have truth on our side, and we want the customers there to connect to the compassion in their hearts that they probably already feel.

“We want the customers to see that other people are willing to go against social norms and speak up for animals. We want to normalise compassion and speaking up for the weak through such protests.

“We want people all over the world to see us as an example of standing up for non-human animals.”

DxE’s branch in Brighton, UK, has been particularly prominent in the media in recent months.

Brighton DxE has protested at a steakhouse, a Waitrose supermarket and even in a so-called ‘ethical’ supermarket which sells meat.

The focus on the group even led three members to be grilled by Piers Morgan on Good Morning Britain last month.

“We were very happy to see that our message has reached potentially millions of people,” Sawhney reflected.

Since it founded DxE has also conducted many ‘open rescues’.

Sawhney continued: “We call them ‘open’ rescues because we don’t wear masks. We believe that what we are doing is morally right and that there’s no shame in it.

“These missions involve rescuing several animals at a time from factory farms and documenting the horrendous conditions there.

“We conduct open rescues not only to save the lives of the animals we take out and get veterinary care for, but also in order to gain mainstream media attention and thus start a public discussion about what animals in the industry are truly experiencing and what they deserve.”

The reach of DxE’s activism cannot be questioned, as rescues have been covered by media giants such as The New York Times.

“In our open rescues, we typically expose false marketing of companies and show that there is no ‘humane meat’, contrary to their claims.

“We also have shown that ‘cage free’ hens oftentimes live in giant, filthy, overcrowded barns, usually with no access to the outdoors or sunlight.

“We focus on getting international media coverage for our open rescues also to show the public that not only do animals on farms suffer tremendously, but also that we are willing to take legal risks to rescue them because it’s the morally correct action.”

Such actions have landed many members of DxE in legal difficulties, as taking sick animals from farms is still considered theft.

“Historically it has been shown that what’s legal is commonly incongruent with what’s moral,” Sawhney argued.

“We use these to again draw the public’s attention to the plight of animals, and to disprove the ‘humane lie’ that most uninformed meat consumers believe.”

This approach is working – adversarial news publication The Intercept created a documentary about the felony charges against several activists in spring of 2018 in Utah.

“We hope that our continued practice of open rescues, despite severe legal risk, inspires the public to question which side is truly ‘right’: activists who rescue injured animals from farms or farm owners who treat animals as property for purposes of profit and unnecessary consumption.”

Sawhney continued: “I publicized my own painful tale of sexual victimization. In telling my story, I drew emotional parallels to the experiences of cows getting systematically raped to cause them to give birth and thus produce milk.”

DxE also creates short videos to tell the stories of open rescues, and to explain the reasons for each action.

“We hope that our disruptive protests, open rescues, and compelling storytelling will reach millions of people around the world to show them that it’s okay to listen to their hearts and challenge the social norm by standing up for animals,” Sawhney said.

“We envision a world where humans will stop forcibly breeding other animals into existence in order to kill them and use their bodies.

“We see a world in the future where it will be frowned upon to think of nonhuman animals as objects to be used and abused; where humans treat other animals with the same compassion and respect they show other humans.

“For that, people must hear and feel our message and allow it to draw out the love and kindness inside their hearts.

“We suspect that most people already feel compassion for animals and want to help them. So we aim to make them aware of it and make it easy for them to become vegan, if the whole society changes first and embraces the animal liberation message.”

What do you think if Direct Action Everywhere’s tactics? Tell us in the comments section below!