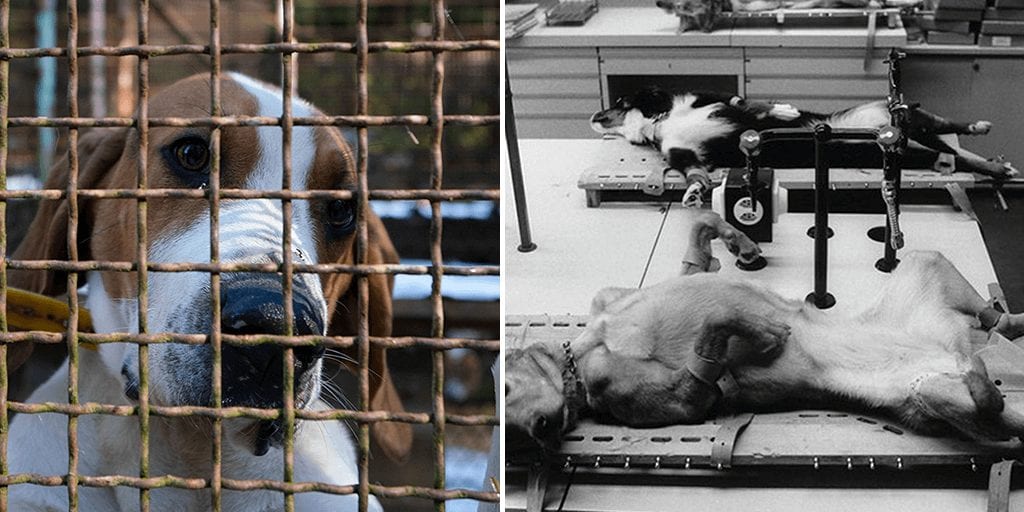 ‘Laboratories use a diabolical range of methods to kill animals, inflicting unimaginable suffering on them’

After the French government sanctioned dog breeders to sell “surplus stock” during the Covid-19 crisis, all excess breeds of dogs and puppies are being sold off to animal testing laboratories for cruel experiments, revealed an animal rights organization.

According to One Voice founded to denounce animal exploitation, France is the European champion in animal experimentation with more than two million victims a year and the only country to use so many dogs in laboratories.

It said in a statement that with the nation’s government amending the regulations on the protection of animals used for scientific purposes under decree number 2020-27 of 17th March 2020, “all breeds of dog and puppy are destined for the scalpel.”

The animal rights group warned that “relaxation of these criteria benefits non-specialist suppliers and will give rise to a new system of shameful abuse and, eventually, make organised massacre legal.”

Calling the experiments “disgusting torture”, One Voice highlighted that the nation continued their barbaric and diabolic experiments on dogs, despite substitutes to develop scientific solutions including cell cultures, mini-organs in vitro, digital modelling (in silico), and mathematical modelling being available.

It said researchers normally opted for hunting dogs because they are “medium-sized, gentle and docile” and do not fight back.

Describing the plight of dogs the  group said:  “The abuse inflicted on the dogs is indescribable: medicaments are tested on them, they are injected with viruses, they are poisoned so that the symptoms and resultant damage can be studied, their organs are ‘examined’, they are made ill or mad in the name of science and genetic experiments are carried out on them, all in prison conditions.

“Laboratories use a diabolical range of methods to kill animals, inflicting unimaginable suffering on them.

“Those dogs that do not die by violence or in protracted agony are killed in order to be sold as ‘spare parts’.”

The group is calling on French nationals to challenge the “decree that the government adopted on the quiet during the lockdown” and “raise awareness of these government shenanigans.”

One Voice has also submitted an appeal to France’s Prime Minister against the decree, and denounced the measures since it violates EU rules.

Share this news to reveal the atrocities inflicted on animals for scientific purposes.