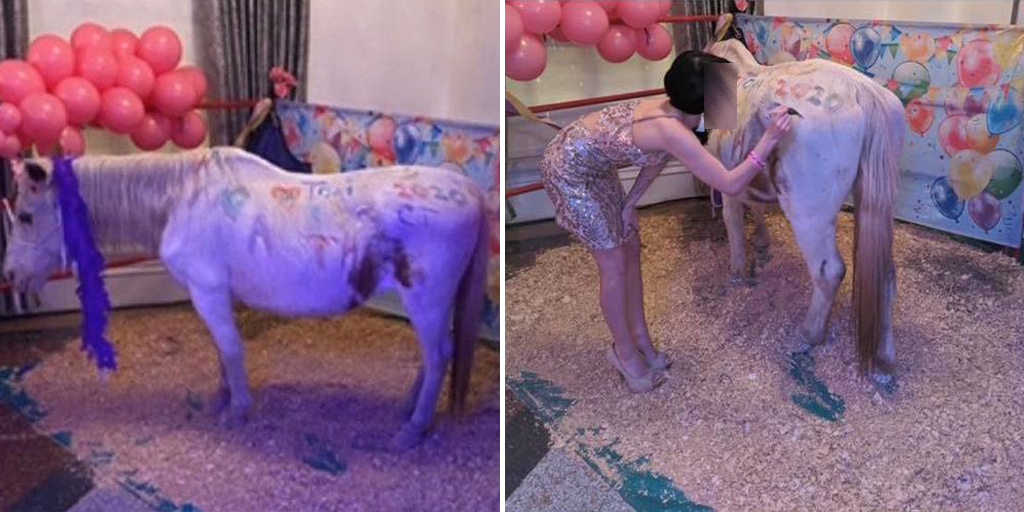 Animal rights activists have reacted with fury to a new craze in Florida, US in which horses are painted by children at birthday parties.

Animal welfare groups have warned that businesses offering horse painting are creating a risk to the horses’ health and say the parties are likely to cause extreme distress for the animals.

Videos and images have emerged online of the bizarre birthday fad which has become popular in South Florida.

Responding to accusations of animal cruelty, Joanna Sime, owner of Florida Everglades Equestrian Centre, defended the parties in which children play with and are encouraged to paint animals.

The horse trainer claimed her horses love to interact with children, and admitted to holding painting parties.

“I know that sometimes people think that’s not the nicest thing to do to a horse but if she didn’t like it, we wouldn’t do it. She absolutely adores it,” she told ABC7

“If the horse showed any discontent or unhappiness, then we wouldn’t do it.”

She also claimed the washable paints are not bad for the horses or children.

She said the paints are ‘totally non-toxic’ and are ‘paints that they give to children to do finger painting in Kindergarten’, but animal rights activists were not satisfied by her defence.

Senior Director of welfare group PETA, Stephanie Bell, said in a statement: “Putting a skittish horse through the stress of being tied up and painted by a crowd is no way to celebrate.

“Painting live animals puts them at risk of developing painful allergic reactions and endangers the public, as it’s impossible to predict how an animal will react in a crowded setting.

“PETA urges everyone to stick to party activities that are fun for everyone–like pinatas and face-painting–and leave sensitive animals in peace.”

Shame on anyone who decided that covering a vulnerable horse with graffiti was an acceptable way to ring in the new year. Painting live animals puts them and the public at risk. PETA is urging The Mayo Hotel to keep animals out of its events in 2020 and beyond.

What do you think of horse painting parties? Should they be banned? Share your thoughts in the comments section below!