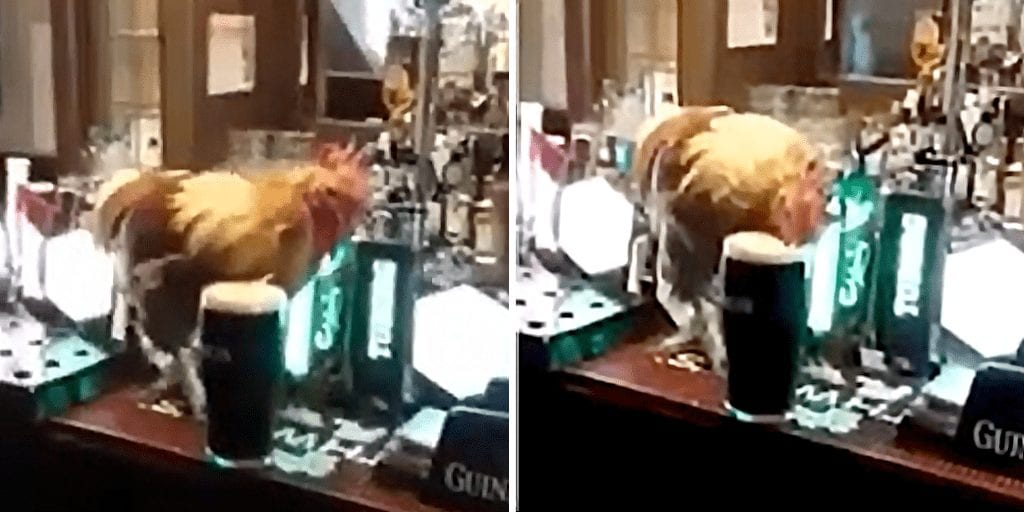 Animal welfare activists have blasted a video which shows a cockerel drinking a pint of Guinness in an Irish pub.

The footage shows a pint placed on top of a bar, and a group of men can be heard cheering and egging the chicken on to drink the alcoholic drink.

The chicken approaches the pint and dunks its beak in, appearing to drink from it, and the men can then be heard cheering.

Alcohol should never be given to birds, and vets have warned that instances such as this could be fatal.

The Dublin Society for Prevention for Cruelty to Animals has condemned the footage.

Gillian Bird, a spokeswoman for the DSPCA, said in a statement to the Irish Mirror: “It’s not something we would approve of. Alcohol shouldn’t be fed to any sort of animal.

“Any animal being treated this way is disrespectful to it. Alcohol is a toxin and shouldn’t be given to an animal.”

The video, featuring the chicken known as ‘Seamus’, has been viewed more than 300,000 times on Facebook.

Men crowd around the cockerel, and the man filming the video say: “Go on ya boyo, put your head in the pint!

The cockerel then continues to drink from the pint as customers cheer and celebrate.

The DSPCA has appealed for information to help identify where the footage was taken.

“If anyone knows where this chicken is or has any information regarding its whereabouts we’d ask them to contact the DSPCA,” the organisation said in a statement.

What do you think of this video? Should the pub face consequences? Share your thoughts in the comments section below!