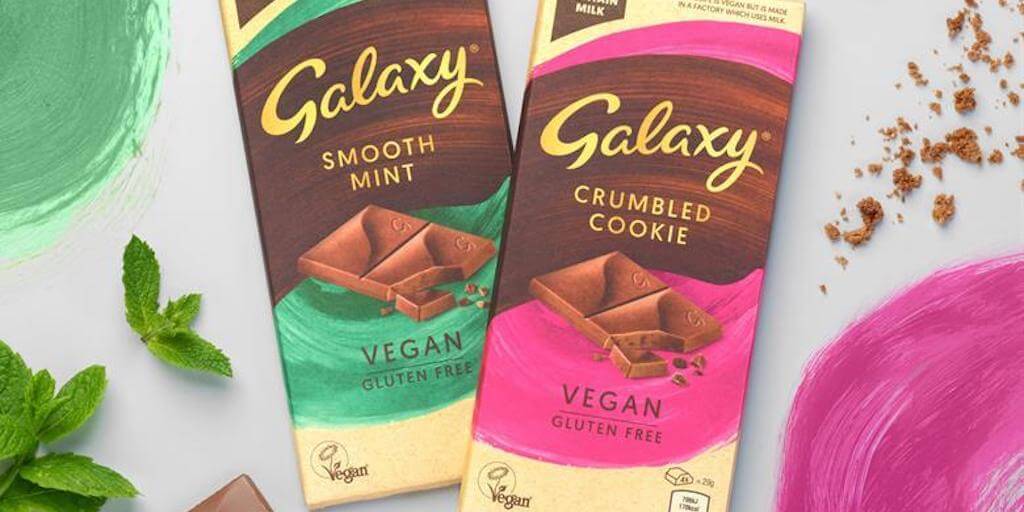 Popular food blog, Vegan Food UK revealed the news in an Instagram post, in which it also revealed that the new bars: Galaxy Vegan Smooth Mint and Galaxy Vegan Crumble Cookie will roll into Asda from 21 September.

Mint and Crumbled Cookie Galaxy Bars are launching at @asda next week 😲🥳💕 …. TAG SOME PEOPLE THAT NEED TO KNOW Finally everyone we have Cookie Crumble and Vegan Mint Chocolate!!! 😲 From 21st September in Asda. Thanks to our Community Manager @veganuponhull for the heads up Follow us @vegan_food_uk for a load more news just like this ⭐⭐⭐

The new Galaxy Vegan Smooth Mint is made blending almonds with rich cocoa and peppermint oil to make a smooth and creamy combination of mint and chocolate.

The Galaxy Vegan Crumbled Cookie bar is a vegan version of the Galaxy Cookie Crumble bar made using rich cocoa and cookie pieces blended in a creamy hazelnut paste.

Galaxy, which became the first major milk chocolate brand to launch a fully vegan alternative uses hazelnut paste and rice syrup instead of dairy to make its range vegan.

Though the packaging still carries a warning that the chocs “may contain milk,” the brand states it is just a precautionary warning since the dairy free bars are also made in the same factory making milk bars.

The new bars are wrapped in a wood fiber film, which is fully compostable, and packed in completely recyclable cardboard boxes just like their predecessors and will retail at a suggested price of £3.

Share this story to let others know of the new flavours added to Galaxy’s vegan chocolate range.