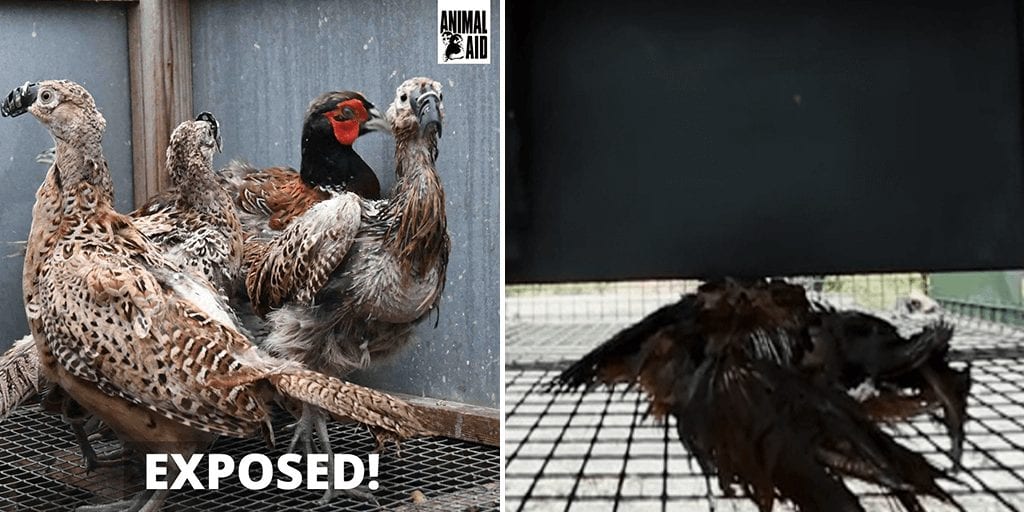 ‘Game farms operate to maximise efficiency and profit, the welfare of the birds incarcerated at these places comes a poor second’

An undercover investigation of a UK game-bird farm has revealed animal abuse and neglect according to a report by the Independent.

Advocacy organization Animal Aid secretly filmed thousands of partridges and pheasants on an unnamed game farm, operating outside the village of Brome Street, near Eye in Suffolk, to uncover the horrific reality of the ‘game’ bird breeding industry.

The organisation estimated the farm had 2,600 partridges and 450 pheasants, kept for breeding, after the egg-laying season was over.

It said that conditions at the farm were in direct violation of government welfare rules. The footage captured pairs of partridges kept in rows of “raised laying cages” lacking in any “enrichment”. The stressed birds were seen repeatedly lunging at the cage roofs desperately trying to escape.

Investigators revealed dead birds were seen lying next to the pheasant cages and many female pheasants had “shrouds” fitted over their beaks to stop them from attacking each other. Shrouds are not allowed to be used as a form of bird management according to welfare norms.

According to the advocacy agency, these farms hold game birds known as ‘breeding stock’ – that is, birds who lay eggs, which are then hatched, and the resulting game birds become feathered targets for shooters.

Calling for a ban on game-bird cages, the group said confining birds in crammed cages causes immense suffering and mental trauma.  The birds also often hurt their heads when they repeatedly fly upwards into the roofs of laying cages and the mesh flooring injures their feet.

In addition, the cages offer no shelter to the extremes of weather. Investigators recorded temperatures inside the cages ranging between -4.9ºC and 41.2ºC.

‘Welfare of the birds comes a poor second’

Fiona Pereira, of Animal Aid, told the Independent: “Sadly, what we discovered at this establishment is not uncommon.

“Game farms are not inspected by the government agencies unless a complaint has been made, so the industry is virtually unregulated.

“Because game farms operate to maximise efficiency and profit, the welfare of the birds incarcerated at these places comes a poor second.”

The farm has been reported to the Animal and Plant Health Agency (APHA), which declared that it would investigate the animal abuse claims highlighted.

To support the animal rights organization and join its petition to ban bird cages, click here.

Share this story to raise awareness for the difficulties faced for animals in the ‘game’ bird breeding industry.