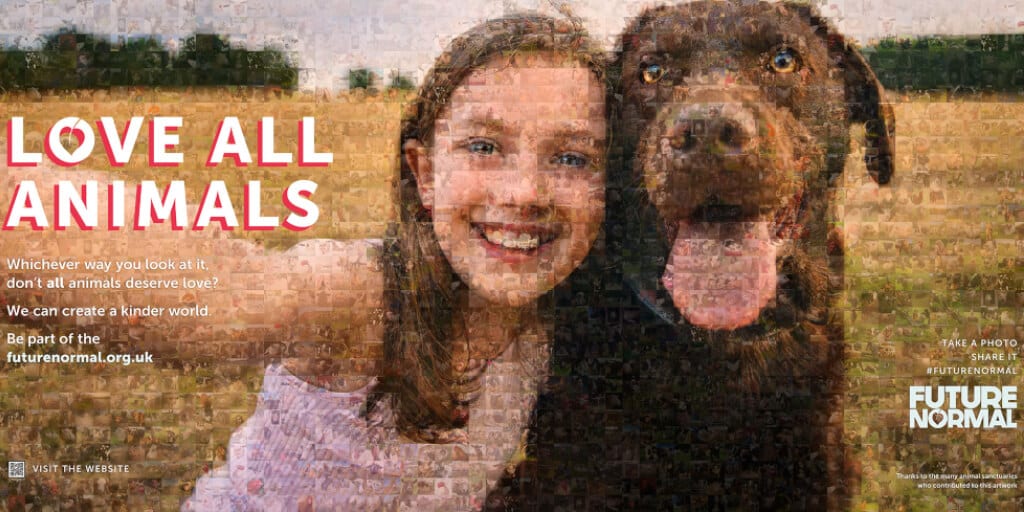 “The world is getting ready to go back to normal but we want people to reconsider what that ‘future normal’ in a post-pandemic world looks like, particularly in relation to the way we view and treat animals.”

A new humongous, one-of-a-kind mosaic unveiled in London is urging people ‘to reflect on their attitudes to non-human animals and consider going vegan’.

The new vegan billboard taking up an entire 47 by 23 foot (14.45m x 6.9m) wall in a popular street in Holywell Lane in Shoreditch, East London has been installed by The Vegan Society as part of the society’s Future Normal campaign – the charity’s biggest campaign to date.

The billboard features a young girl with her pet dog, but on closer inspection, the mosaic is made up of thousands of small images of rehomed, rescued farmed, and sanctuary animals.

It reads: “Whichever way you look at it, don’t all animals deserve love.

“We can create a kinder world.”

The campaign encourages people to take pictures of the billboard – which also has shots of two of ‘the most iconic’ faces in the world – and share their pictures on social media using #FutureNormal.

The billboard comes just a week after the society launched the first official Future Normal Day on 9 April and hosted the first-ever Future Normal Hero Awards – a celebration of those in the community who have gone the extra mile for animals.

“This is an incredibly powerful image that you just can’t miss, and that’s exactly what we wanted,” Mark Banahan, Campaigns Manager for The Vegan Society said.

“We know the world is getting ready to go back to normal but we want people to reconsider what that ‘future normal’ in a post-pandemic world looks like, particularly in relation to the way we view and treat animals.

“If we’re open to making changes in our lives, the Future Normal is a place we can create. Being vegan simply means living in line with the ethics that so many of us already hold in our hearts.”

‘Fantastic and important campaign to life’

The Society worked alongside marketing company UP and Horizon Outdoor to create and install the campaign respectively.

It is the first commercial display in the UK to use Kavalan PVC-free vinyl – a sustainable and environmentally-friendly material – which was sourced specifically for this campaign.

After the unveiling, Susan Pallett at Horizon Outdoor said: “I am thrilled to be working with The Vegan Society in bringing this fantastic and important campaign to life. Located in the heart of Shoreditch the mosaic will be viewed by hundreds of thousands of passers-by over the next few weeks – you can’t miss it!”

“In utilising this well-known art space the society has also helped the Village Underground Arts and Music Venue financially after the pandemic forced it to close last March. What a fantastic partnership.”

The billboard will remain on the wall until 2 May.