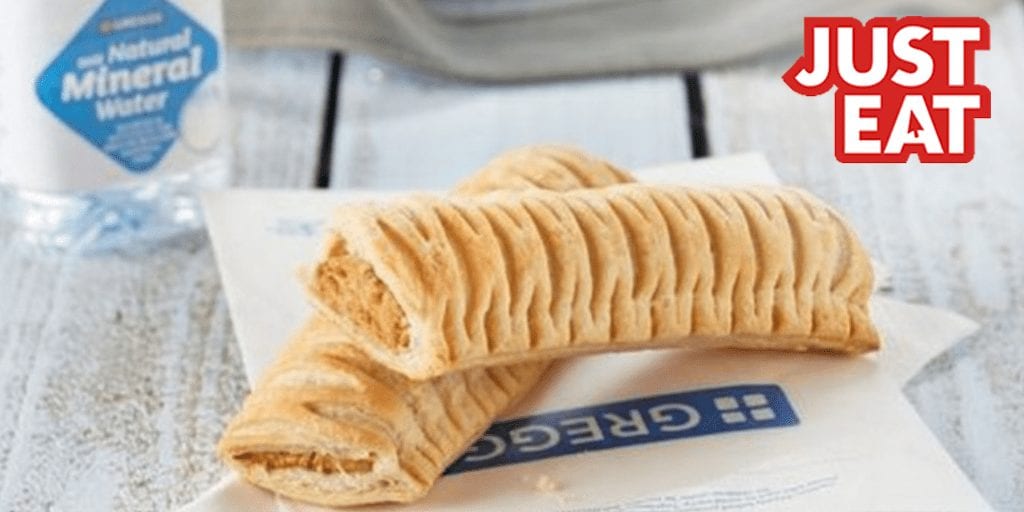 Vegan sausage roll fanatics can now have their favourite plant-based pastry delivered to their door after UK bakery Greggs teamed up with Just Eat.

The delivery service will offer all of Greggs’ food and drink with no minimum spend or delivery fee from stores in London, Glasgow and Newcastle.

And any Gregg-ites desperate for an early morning coffee or snack can order as early as 8am.

A spokesman for Just Eat told Totally Vegan Buzz: “Breakfast and lunch just got infinitely better as Just Eat, a leading global hybrid marketplace for online food delivery, has teamed up with Greggs to bring one of the nation’s favourites to the doorsteps of hungry Brits.

“The exciting new partnership is currently live in nine shops acting as delivery hubs to serve over 1 million households across three cities, Newcastle, London and Glasgow.

“Just Eat and Greggs are kick-starting the partnership with a limited time offer of no minimum spend and free delivery.”

Customers can check out whether delivery is available in their postcode here.

Greggs lovers have already given the partnership rave reviews. Awarding the delivery a five-star rating, Carolia from Glasgow wrote: “First time having a Greggs delivery and I was worried that the pasties would be cold but they were very warm and I actually had to wait a bit to eat them so I am very impressed!?”

Greggs stores on Gordon Street, Victoria Road and Dumbarton Road in Glasgow are all signed up to the delivery service.

Darren from Newcastle was delighted with the bargain offer. “Omg this is brilliant, been wanting Greggs to come on just eat for years, my order was perfect, and thanks for the little extras, will def be back,” he wrote.

The Greggs vegan sausage roll launch was met with hysteria and outrage from meat eaters at the start of 2019, and thankfully the Greggs social media team was on hand to troll Piers Morgan’s reaction.

The bakery has since signalled intentions to expand its vegan options after being met with overwhelming demand.

What do you think of the Greggs vegan sausage roll? Share your thoughts in the comments below!