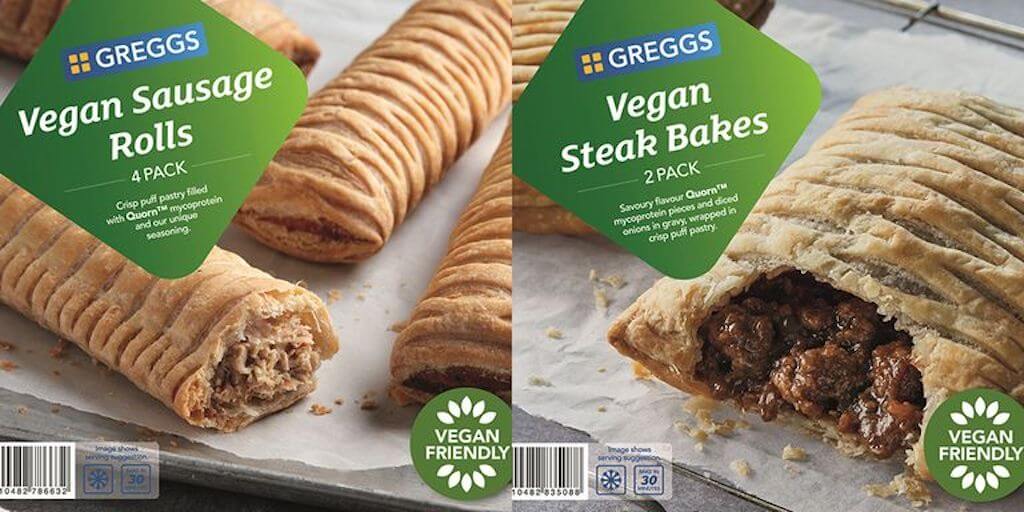 The UK bakery chain has seen massive success with the animal-free versions of its bestselling lines especially the iconic vegan sausage roll and the steak bake.

Bakery chain Greggs has announced the launch of its popular vegan treats in Iceland stores across the UK just in time for Veganuary.

The exclusive frozen Greggs vegan range, including the iconic vegan sausage rolls and vegan steak bakes will be available to buy online on 1st January 2021 and in stores from the next day.

The frozen products take only 30 mins to bake and Greggs’ vegan treats undoubtedly make for very easy, tasty and comforting options especially with the beginning of 2021 looking as crummy as the end of 2020.

Packs of four sausage rolls or two steak bakes will cost you £2.50.

The bakery chain launched its first super-tasty vegan sausage roll back in January 2019, which went on to become Greggs’ fastest selling products of the last six years.

It then went to create the Vegan Steak Bake ‘to mirror some of the original Steak Bake’s classic features, including 96 layers of light and crisp puff pastry, but instead is made with Quorn pieces, diced onions, and a gravy filling’.

CEO Roger Whiteside, who went plant-based after watching The Game Changers, revealed that the chain now wanted to offer vegan alternatives to all its best-selling products, from steak bakes to pasties and doughnuts.

In an interview with Evening Standard at the time, he said: “Many customers are demanding more non-meat products and we want to offer more choices.

Greggs has since expanded its vegan offerings to include vegan hot cross buns, vegan glazed doughnuts, and even vegan mince pies.

Share this story to let others know about Greggs’ vegan treats being launched in Iceland stores.