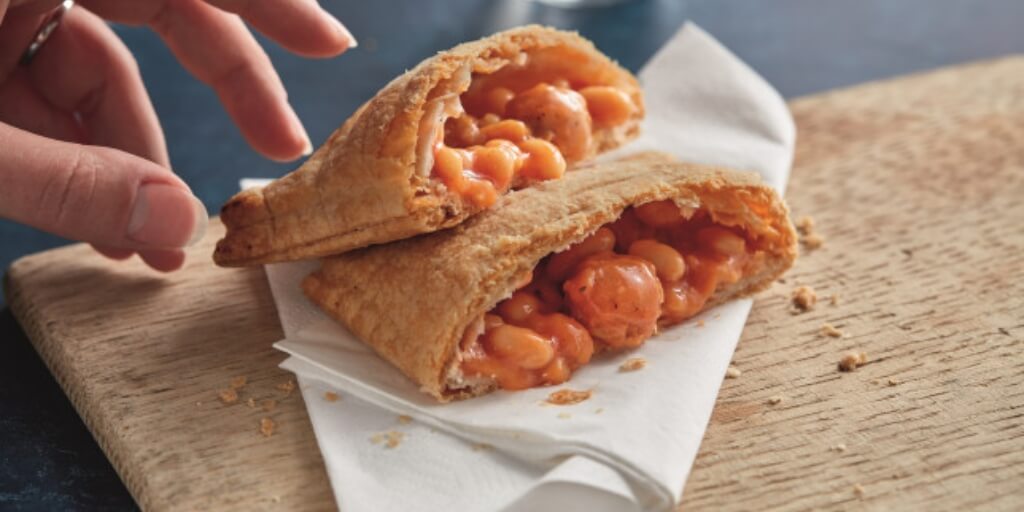 Greggs has added another vegan option to the menu. The popular chain is releasing a vegan sausage, bean, and cheeze melt next week.

The meatless version priced at £1.60 will be available in more than 2000 shops nationwide from 5 August.

It features a golden puff pastry with pieces of Quorn vegan sausages, two types of vegan ‘cheese’, and baked beans.

Greggs released a video teasing the new creation on Instagram. It said: “First we gave you the vegan sausage roll. Then the vegan steak bake. And now, another legend has been veganed.”

“WARNING, it’s a bit of a mouthful,” the iconic store added.

Hannah Squirrell is the customer director at Greggs. She said: “The latest addition to our menu gives customers another vegan-friendly alternative to one of our most iconic menu items.

“As we expand our vegan options with the launch of our new Vegan Sausage, Bean and CheeZe Melt, we mark another milestone as we continue with our journey to become our customers’ favourite destination for food-on-the-go.”

Greggs’ vegan sausage roll was the first item launched by the brand in 2019. It quickly became one of its fastest selling products.

The vegan steak bake launch was also hugely successful with its popularity being “bigger than anticipated,” a spokesperson for Greggs told The Grocer.

The iconic high street bakery, which has been steadily expanding its vegan menu, now offers vegan donuts and a wrap, as well as seasonal options like hot cross buns and mince pies.

In April, the chain added a Vegan Sausage Breakfast Roll and a Vegan Ham and Cheeze Baguette as well.

‘The range will get wider in the future’

In 2019, Greggs’ CEO Roger Whiteside, who now follows a vegan diet, revealed the team was working on a vegan version of every single menu item.

“It took us a couple of years to perfect our vegan sausage rolls, and I can now reveal our staff are working hard in our testing kitchens to make new meat and dairy-free products suitable for vegans,” he told the Evening Standard at the time.

“The range will get wider in the future.”