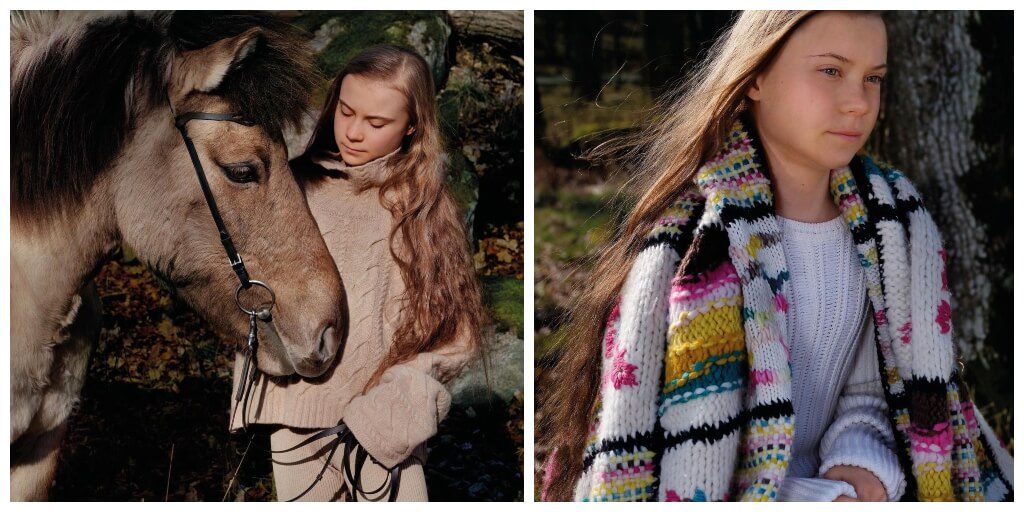 The teen climate activist was called a ‘fraud’ for being a vegan and still promoting animal cruelty by wearing wool.

Greta Thunberg has come under fire for wearing wool in her latest inaugural cover photoshoot for Vogue Scandinavia.

In one of the photos, the 18-year-old, who has become a prominent global voice for climate activism, was pictured sporting a full wool look. She wore a Gabriela Hearst Django merino dress with an Alec blanket crafted from wool by the not-for-profit Manos del Uruguay draped on her shoulders.

For the cover, Thunberg posed with an Icelandic horse underneath a tree. She wore a billowing upcycled trench coat in that picture. According to the lifestyle magazine, the clothes were made of sustainable, recycled fabrics.

The pictures were shot by conservationist duo Alexandrov Klum.

In the interview, Thunberg discussed how fast fashion contributes to the climate crisis.

Later, taking to Instagram, she posted an image of her on the cover and said: “The fashion industry is a huge contributor to the climate-and ecological emergency, not to mention its impact on the countless workers and communities who are being exploited around the world in order for some to enjoy fast fashion that many treat as disposables.

“ Many are making it look as if the fashion industry are starting to take responsibility, by spending fantasy amounts on campaigns where they portray themselves as ”sustainable”, ”ethical”, ”green”, ”climate neutral” and ”fair”. But let’s be clear: This is almost never anything but pure greenwashing.”

The environmentalist also told Vogue Scandinavia that she has not purchased any clothing in three years. “The last time I bought something new was three years ago and it was second-hand. I just borrow things from people I know,” she said.

While Thunberg called out fast fashion and promoted sustainability, Thunberg’s wool look was heavily criticized and sparked a huge outcry on social media since Thunberg has in the past revealed she is vegan.

“Very disappointing to see Greta Thunberg promoting animal cruelty. Animals don’t exist for us to use and abuse however we want. The wool industry is very cruel. Go vegan,” wrote one user.

“Absolutely despicable, sheep are not here for us humans to use no matter how ‘sustainable’ their exploitation is.

Another added: “Greta Thunberg lied and told the world she was vegan, exploiting the bodies of sheep is not very vegan. All of the sheep in the industry end up slaughtered like all other animals in the industry and none consent to any of this. Go vegan Greta, this is nonsense.”

“A vegan wearing wool? looks like she’s a fraud all along,” a third commented.

However, vegan charity PETA came out in defence of the young activist.

“We have confirmed that Greta Thunberg was unaware that the outfit she was photographed in was made of real animal wool,” PETA said.

“We were sure that as a vegan and an environmentalist, she would not have worn it had she known.

“The wool industry is based on exploitation, so it’s not surprising that it has attempted to exploit Greta’s Vogue Scandinavia shoot to promote its bloody and environmentally destructive business.

“The woolly bullies—who are using this mistake as a selling point—shouldn’t be surprised if they hear from Greta’s lawyers.”