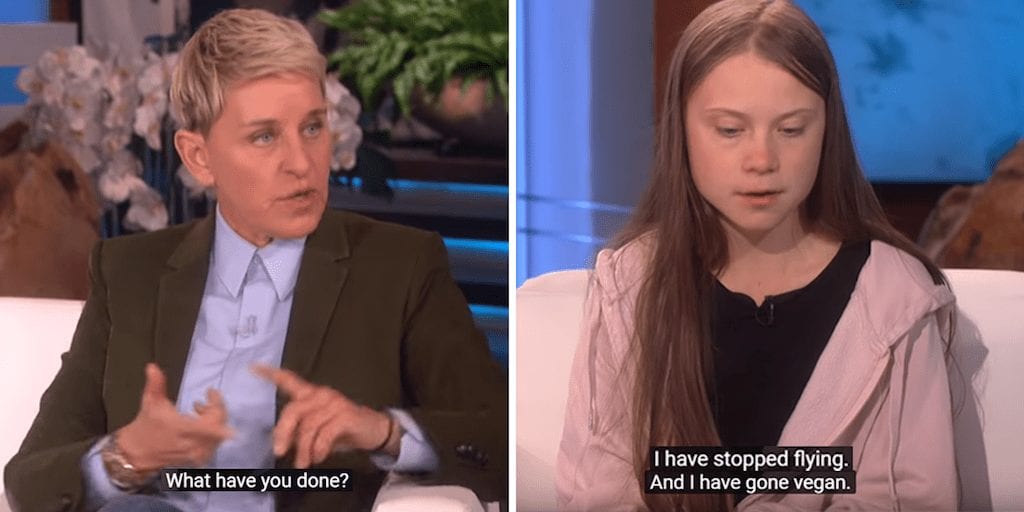 During her interview on the Ellen Show last week, Greta Thunberg confirmed that she has gone vegan to do her bit for the environment.

After trying to reach out to Greta Thunberg for two months, Ellen DeGeneres was finally able to interview the 16-year-old climate change activist who is making waves ever since her Fridays for Future protests gained traction worldwide.

The global movement has changed the teen’s life as her schedule remains packed with climate rallies and conferences to attend.

On Friday’s episode of “The Ellen DeGeneres Show,” host Ellen DeGeneres started the show by thanking Thunberg for her commitment to the global climate change movement stating “we’re just not doing enough”.

‘What you are doing is the loudest voice and it’s getting so much attention and we need this because we haven’t obviously done enough,” she added.

When DeGeneres asked Thunberg whether she had implemented other changes to promote her cause, Thunberg replied that she had stopped flying, had gone vegan, and had started living a minimalist lifestyle.

Later, DeGeneres asked Thunberg if she would consider a meeting with the US president to discuss climate issues.

Thunberg responded amidst audience applause: “I don’t understand why I would do that.

“I don’t see what I could tell him that he hasn’t already heard, and I just think it would be a waste of time, really.”

Greta’s activism has been divided in terms of her supporters. While many conservatives such as Michael Knowles, and Piers Morgan have criticized her stance, Donald Trump has been her biggest detractor.

In September, after Greta rebuked world leaders at the UN Summit, Trump seemingly jeered the teen on Twitter stating: “She seems like a very happy young girl looking forward to a bright and wonderful future. So nice to see!”

Others have lauded the youngster for her effort. Recently, Leonardo DiCaprio called Thunberg ‘a leader of our time’ after meeting her for the first time.

He shared their picture on Instagram stating: “There are few times in human history where voices are amplified at such pivotal moments and in such transformational ways.

“History will judge us for what we do today to help guarantee that future generations can enjoy the same livable planet that we have so clearly taken for granted.”

Earlier, Arnold Schwarzenegger tweeted that he was ‘starstruck’ when he met her and praised her as ‘someone who doesn’t just complain but gets out and does something about it’.

“The climate movement does not need any more awards. What we need is for our politicians and the people in power [to] start to listen to the current, best available science,” she said.

What impact will Thunberg’s activism have? Share your thoughts in the comments section below!