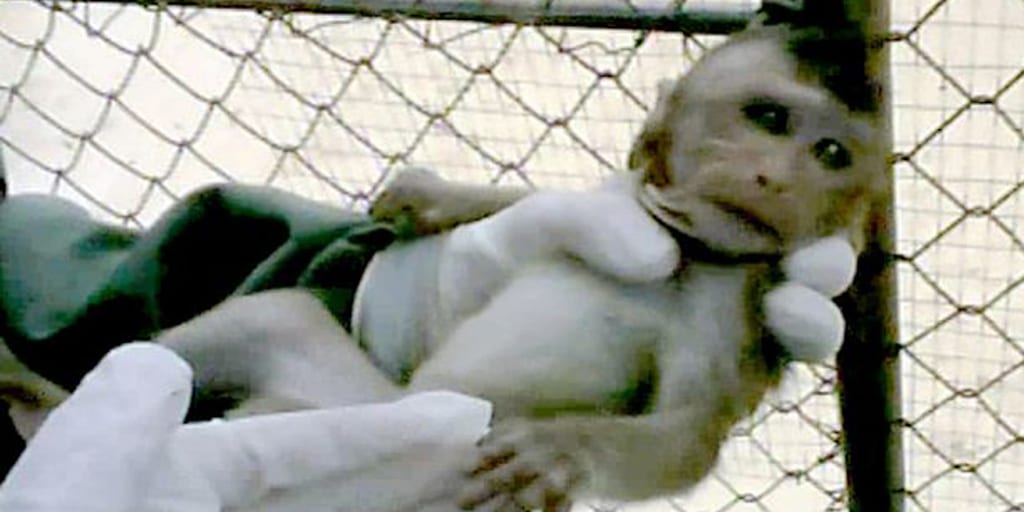 The UK government has been urged to take action to ban cruel animal testing after a harrowing video emerged of a baby monkey being separated from its mother at a lab.

The video shows the tiny macaque being torn from its parent’s arms, and the young monkey visibly shakes with fear.

The footage was shot in Mauritius, but the monkey will be transported to a UK research lab for testing. Its parents lived in the wild, but were caught and taken into captivity for breeding purposes, according to reports.

An EU law forbids the use of long tailed macaques in animal testing, and animal rights group Animal Defence International released the footage to reinforce calls on the UK government to stamp out the practice.

President Jan Creamer said: “The public will be horrified to learn that not only is Britain still a major primate user, but it allows researchers to use monkeys whose parents have been taken from the wild and used as breeding machines too.

“The UK effectively encourages dealers in Vietnam and Mauritius to stock their factory farms by trapping wild monkeys.”

250 monkeys known as ‘F1 Primates’ were caught in the wild last year to use in UK labs. An EU law to ban their use will come into force in 2023.

A shocking 2,600 long-tailed macaques were imported into the UK last year – 2,064 from Mauritius and 542 from Vietnam, according to a report in The Mirror.

Animal welfare groups have reported horrific treatment of animals in Mauritius, including incidents of monkeys being swung around by their tails in Biodia, while in Vietnam they are kept in tiny, rusty cages.

Animals are also force-fed and injected with harmful experimental drugs.

To support the call for an end to the horrific practices, ask your local MP to back Early Day Motion #2228: Developing Innovative Science – Better for Animals and People.