Heavy tourists who ride donkeys in Greece can be fined £25,000 under new laws | Totally Vegan Buzz
Skip to content

Heavy tourists who ride donkeys in Greece can be fined £25,000 under new laws 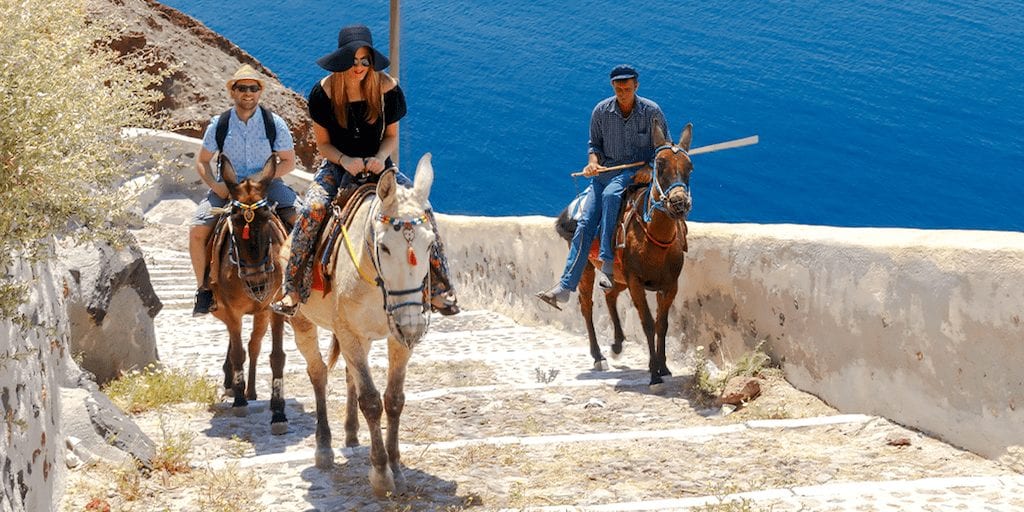 Tourists who pay for cruel donkey rides in Greece could be slapped with a £25,000 fine under new laws.

Authorities have introduced new laws to protect donkey welfare after a string of investigations by animal rights groups revealed horrendous conditions on the island of Santorini.

From now on it is illegal for donkeys to carry any tourists who weigh more than 100kg (15st 10).

Despite the new laws, PETA revealed in a shocking video that donkeys are still being forced to carry tourists who appear to be way over the weight limit.

Government officials have responded to the latest investigation by warning that anyone who breaks the rules could be given severe penalties.

Greek minister of agriculture Makis Voridis said: “The welfare of productive animals, working animals and generally all the animals of our country is a major concern for me personally and for our Ministry.

“The aim of the Ministry in view of the forthcoming tourist season is to tighten the relevant controls throughout the Greek territory. In the event of violations of existing legislation by the audit authorities, the offenders will be subject to severe penalties. It is noted that the envisaged fine may be up to €30,000 (£25,000).

“We try to make sure to keep up-to-date on the latest scientific data and [EU] Commission guidelines aimed at preventing any kind of animal maltreatment and improving their welfare conditions.

“In this way we believe that the traditional character of the local communities is maintained and strengthened, their economy is improved but the animals are also protected.”

Activists are not satisfied with the action of authorities. PETA is calling for Greek legislators to introduce a complete ban on all such rides.

The recent footage also reveals that many animals stumble – often after being beaten with a stick by a handler – endangering nearby tourists who are on foot.

PETA Germany eyewitnesses reported frequently having to dodge unsupervised donkeys and mules in order to avoid injury, and one man even had to jump onto a wall to get out of the way of the struggling animals.

“The video also shows blatant flouting of the new weight restriction, despite veterinary recommendations that donkeys shouldn’t carry more than 20% of their own body weight – approximately 50 kilograms. When not being made to carry extremely heavy loads on their backs, the animals are often tethered in the blazing sun without access to water or shade,” PETA added.

What do you think of donkey rides in Santorini? Share your thoughts in the comments section below!