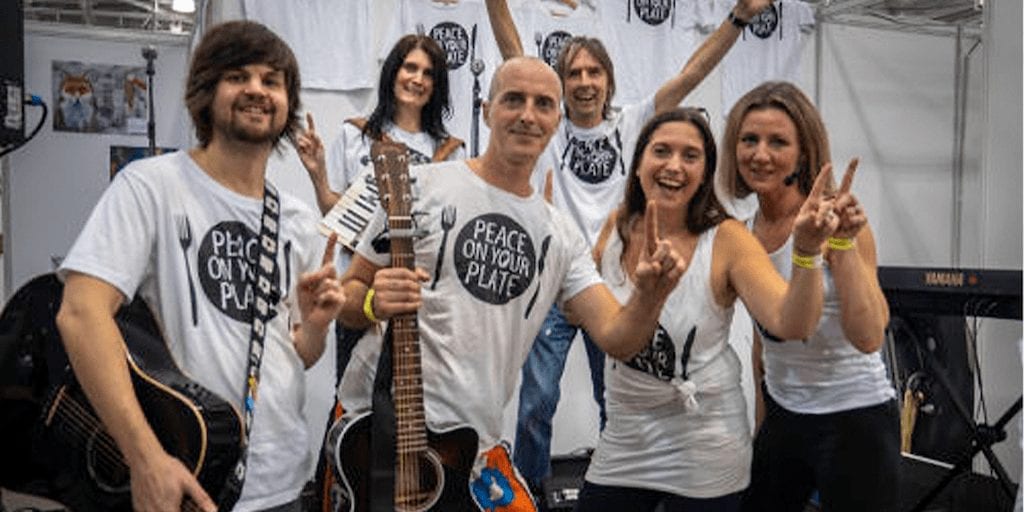 Image: Peace On Your Plate

The writer of Peace On Your Plate – a song which hopes to be the first ever vegan Christmas Number 1 – has called on the plant-based community to mobilise and spread a message of compassion to all animals this Christmas.

The song written and performed by Gavin Chappell-Bates and Giles Bryant is on track to break into the top 40, but the artists believe it can rapidly climb the charts with the help of vegans across the UK and beyond.

Currently ‘I Love Sausage Rolls’ by LadBaby is the bookies’ favourite to take the crown – performed by the artist who described vegan sausage rolls as ‘un-British’ earlier this year.

But Peace On Your Plate has got off to a promising start in the charts this week, and the writers are remaining optimistic.

“If we can rouse the vegan army and push the song as hard as we can, then we can wake up to a Christmas Number 1 which spreads the vegan message rather than one about a sausage roll,” Gavin told Totally Vegan Buzz.

All of the download and stream links for the Peace on your Plate can be found here.

The song was set for exposure on Good Morning Britain this week – hosted by vegan-hater-in-chief Piers Morgan –  but unfortunately Gavin’s interview was cancelled to make way for politics coverage following the UK general election.

“We were looking forward to speaking with Piers Morgan. We knew he wasn’t there to help our cause, he was going to do whatever he could to pick holes in what we were doing,” Gavin said.

“But we are clear in our message of peace and positivity, and he wouldn’t have shaken us. We’re just vegans trying to make a better world.”

All profits from Peace On Your Plate will go to vegan charities, and the song has a message which is intended to be accessible to everyone.

“When we were writing it we were conscious we didn’t want to create more division at a time of divisiveness,” Gavin said.

The song features vegan, vegetarian, pescetarian and flexitarian singers and is upbeat with a traditional Christmas feel. But its two writers are passionate vegans and the song has a strong vegan message.

“We wanted to be accessible but didn’t want to shy away from the truth, so we have lyrics about factory farms and how many animals are slaughtered at Christmas,” Gavin said.

“Some lyrics may be jarring to some people, not everyone will be happy. Some people think we are too light hearted, and others say you’re pushing it in our faces.

“But most people say ‘thanks for taking a middle ground’. We’re asking people to put Peace on your Plate this christmas, not telling them to.

“And we’ve got the usual meat eater trolls talking about bacon sandwiches, so we must be doing something right,” Gavin added.

“Even if we don’t become Number 1, it may pave the way for someone else to get it next year, and we can keep using music to get the vegan message across.”

We have until midnight on Thursday, December 19 to boost Peace on Your Plate. Share this story and download the song here to help achieve the first ever vegan Christmas number 1!