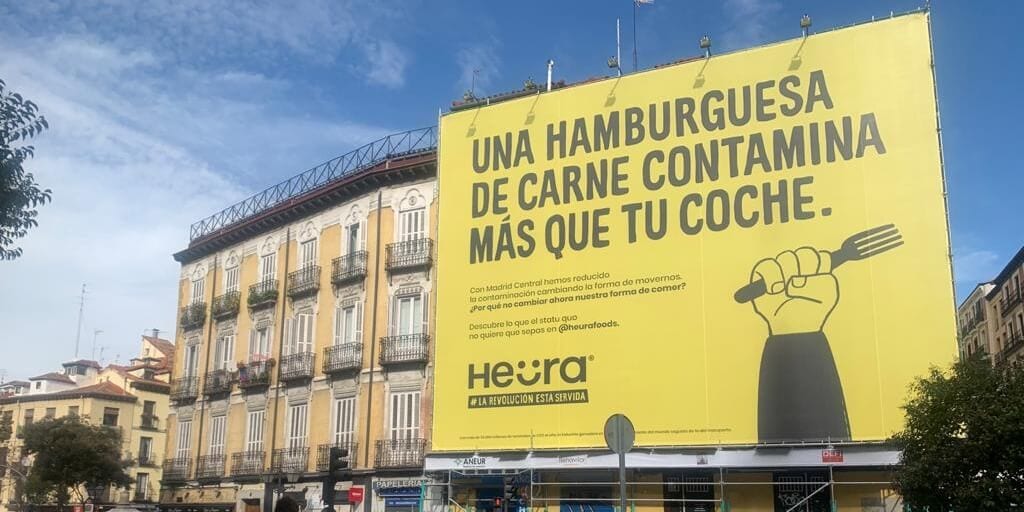 Heura’s campaign targeted the livestock industry’s impact on the environment, health, and animals.

An award-winning vegan meat brand in Europe has won a lawsuit filed against it for its provocative advertising highlighting the pollution caused by the livestock industry.

Last November, Spanish brand Heura put up a huge billboard in Madrid, which read:  “One hamburger pollutes more than your car”.

It added: “Together with Madrid Central, we have reduced air pollution by changing the way we travel. Why not change the way we eat next?

“Discover what the status quo doesn’t want you to know at @heurafoods.

“Releasing over 32,000 million tonnes of CO2, the livestock industry is the largest source of Greenhouse gas emissions, followed by transportation.

“HEURA. The Revolution Is Served.”

It stated: “Releasing over 32,000 million tonnes of CO2, the livestock industry is the largest source of greenhouse gas emissions, followed by transportation.”

The billboard caused a huge backlash from Spanish meat industry associations. They sued Heura for inaccurate and misleading claims.

Although Heura removed the billboard within a month and even invited key meat industry players to discuss how they could work together to create a more sustainable industry, the associations took the vegan meat brand to court and even filed for precautionary measures.

However, after reviewing the case, the court ruled in favour of Heura.

It said: “Heura’s advertising messages have a scientific basis and are extracted from scientific reports and studies issued by prestigious publications and organizations, such as Science, Nature or FAO.”

Following the verdict, the brand wrote on Instagram: “This step is not ours it is from all the companies, projects, organisations and people who are pushing for a plant-based future.

“Thanks to everyone who joined forces and gave us support in this trial.

“This is the first step, but it’s a very important one to assure we can continue spreading the impact meat has on the environment, health and animals.”

Bernat Ananos Martinez and Marc Coloma, founders of Heura Foods, added: “The rejection of the precautionary measures by the courts is a great step forward for everyone; information is power and awareness is transformative.

“People often underestimate how much positive impact we can have on the world with small gestures. We are very pleased to be able to continue contributing by raising awareness and empowering citizens.”

“We should celebrate the decision as yet another opportunity to open dialogue and build a sustainable food future in which Spain can be a leader.”