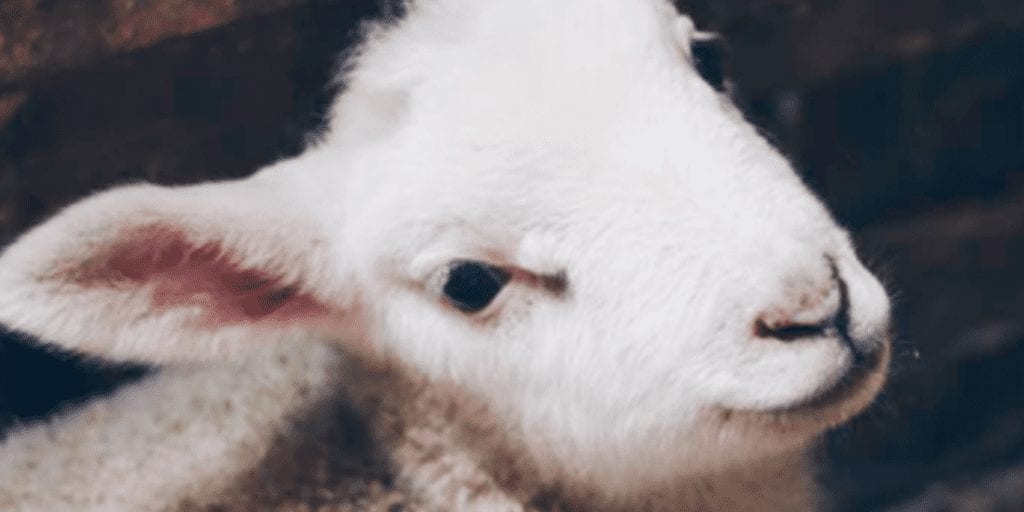 Activists held a demonstration at a so-called ‘ethical’ slaughterhouse last week to target an event which they described as ‘textbook cognitive dissonance’.

Tottingworth Farm in Heathfield has some of the ‘highest welfare standards’ in the UK and stocks ‘ethical’ Brighton supermarket Hisbe.

Last week protesters from Sussex Animal Save held a demonstration at the farm’s ‘lambing’ event in which families and children are invited to comfort cute baby lambs – right next to the farm’s functioning slaughterhouse.

Activists stood beside the farm holding pictures of animals with messages such as ‘I am not property’ and ‘There is no right way to kill someone who wants to live’.

In recent months in nearby Brighton, protests from separate organisation Direct Action Everywhere have been met with a huge backlash, including one at a Steakhouse and another at supermarket Waitrose.

But one mother who brought her children along to the event at Tottingworth Farm praised the group’s conduct on a community Facebook group.

“Just to put an alternative view on here, myself and my children were not bothered or shouted at or harassed by the bunch of vegans who were calmly standing there exercising their right to protest (something we should surely want to protect as a British value),” she wrote.

The demonstration at Tottingworth was led by Sussex Animal Save organiser Marc Gurney.

He told Totally Vegan Buzz: “We encouraged customers to recognise that these baby lambs who will be comforted by many local families, will also be killed at this slaughterhouse.

“How can we love an animal but pay for them to be killed for food? This is a textbook example of cognitive dissonance.”

Activists directed ‘animal lovers’ to nearby sanctuaries where they could visit similar animals.

“Whilst not supporting an industry who makes money from killing them,” Gurney added.

“We had some positive conversations with the public and was lovely to see one who posted on the Heathfield Community Facebook page saying that members of Sussex Animal Save calmly approached her and gently educated her and her children about the lambing industry, and expressed that we should indeed be exercising our rights to protest.”

Tottingworth has some of the UK’s highest welfare standards officially, but the contradiction between ‘high welfare’ and ‘slaughter’ further fuel the group’s mission to protest at the farm.

“It’s not about the conditions, all the animals still endure suffering leading up to their final moments and then experience sheer terror before they are needlessly killed for food,” Gurney explained.

“There is a clear abundance of plant-based foods which we can survive and thrive on.”

Sussex Animal Save activists are regularly seen protesting at local slaughterhouses or on the streets of Brighton. Gurney is an advocate of all forms of activism, however big or small, to make a difference for the animals.

What do you think of the farm’s lambing event? Tell us in the comments section below.