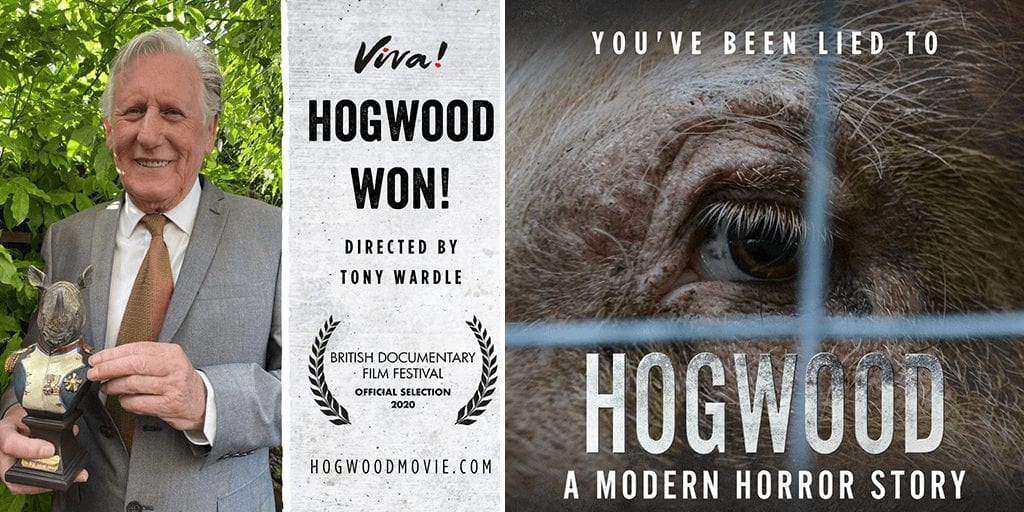 ‘There are modern horror stories taking place each day. Not only are these horrors hidden from sight, but they are endorsed by huge corporations and the Government’

The 35-minute film, which aims to expose pig farming in the UK is directed by Tony Wardle.

Narrated by vegan actor and Game of Thrones star Jerome Flynn, the indie film centers around Hogwood farm, the UK’s biggest and notorious pig farm ‘while delicately weaving a chilling tale of negligence and greed.’

The film’s narrative is intertwined with undercover footage and interviews with investigators and activists from Viva!

While the film was nominated in 2 categories– the ‘Best British Short’ and the ‘Wild Animal Award’, it won the latter at the British Documentary Film Festival. This award recognizes documentaries that capture animals and wildlife in a creative and enlightening way.

“Your documentary handled an incredibly disturbing topic very well and it’s certainly changed a few of our staff’s food shopping habits because of it,” said the jury.

According to the organizers, the 8-year-old festival, which screens at London’s prestigious Cineworld Cinema, Leicester, celebrates exceptional documentary film-making.  The festival is always “looking for passionate stories, well told that need to be seen.”

“We couldn’t be more thrilled to win this award and this accolade is in every sense the result of a team effort,” Tony Wardle, Director of HOGWOOD and Associate Director of Viva! said in a statement.

“I have been producing investigative documentaries for many years and no film has been more harrowing than HOGWOOD.

“There are modern horror stories taking place each day in the British countryside. Not only are these horrors hidden from sight, but they are endorsed by huge corporations and the Government.

“That is why this film had to be made — because the public has a right to see what takes place beyond the factory farm walls. A big thank you to the judges at the British Documentary Film Festival for recognising our film.”

The documentary is available on Apple TV, Amazon Prime, and Google Play Movies.

Share this story to let others know of the award winning vegan film:  HOGWOOD: a modern horror story.