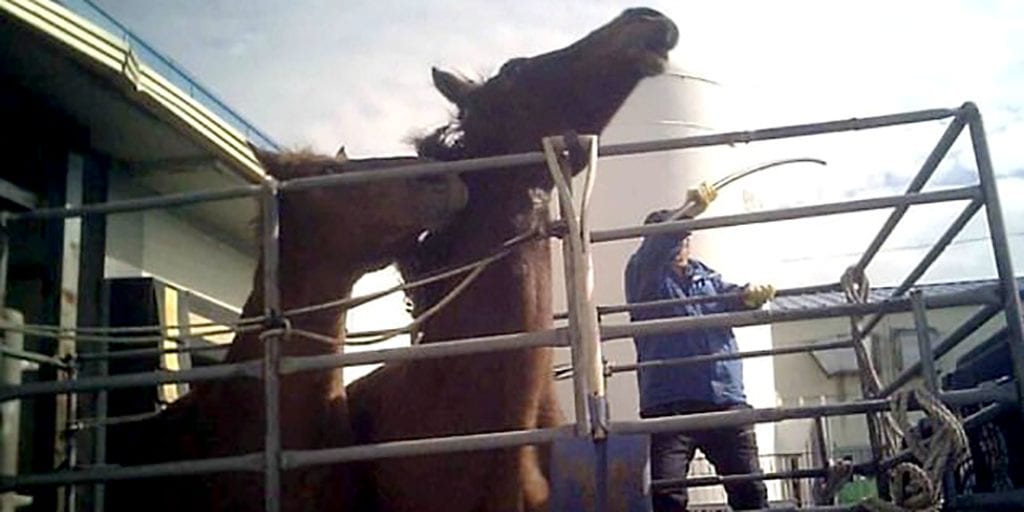 Workers at a Korean slaughterhouse have been charged with animal cruelty after a harrowing video investigation exposed them for abusing former racehorses.

Police have launched an investigation into Jeju Livestock Cooperative after an undercover investigation showed racehorses being taken to slaughter hours after their final races.

Shocking video footage from People for the Ethical Treatment of Animals shows workers hitting horses, who are trembling with fear, with metal poles before stunning them with an electric rod.

Horses can be seen visibly distressed as they are killed side by side. Killing horses in front of others violates the South Korean Animal Protection Act.

The racehorses are reported to be related to two famous racehorses called Winx and Zenyatta. The unwanted horses were sold to South Korean owners in 2008.

Following the footage, the Korean Ministry of Agriculture, Food and Rural Affairs (MAFRA) and the Korea Racing Authority (KRA) have agreed to implement a retirement program for racehorses.

Koreans bet more than US$8 billion annually on races, according to PETA.

“Just as in the United States, racing takes place primarily on dirt tracks, so the KRA imports hundreds of American horses each year for racing and breeding,” PETA said in a statement.

“While aggressively breeding and bringing in new blood to improve South Korean racing, the KRA discards those horses who get injured or don’t succeed.

“A KRA official stated in 2018 that of the 1,600 horses “retired” from the racing industry each year, only 50 (or about 3 percent) are deemed suitable for other equestrian uses.”

Others are slaughtered for meat, while horse fat ‘oil’ is used in beauty products.

The undercover investigation by PETA showed the animals kept in tiny, filthy pens.

PETA spokesperson Emily Rice said: “These charges should also be a wake-up call to all those involved in horse racing in Korea and Australia.

“While we continue to breed horses for human entertainment and profit, many will end up hanging by one leg in abattoirs like Nonghyup.”

Share this story to expose the truth behind the racehorse industry.