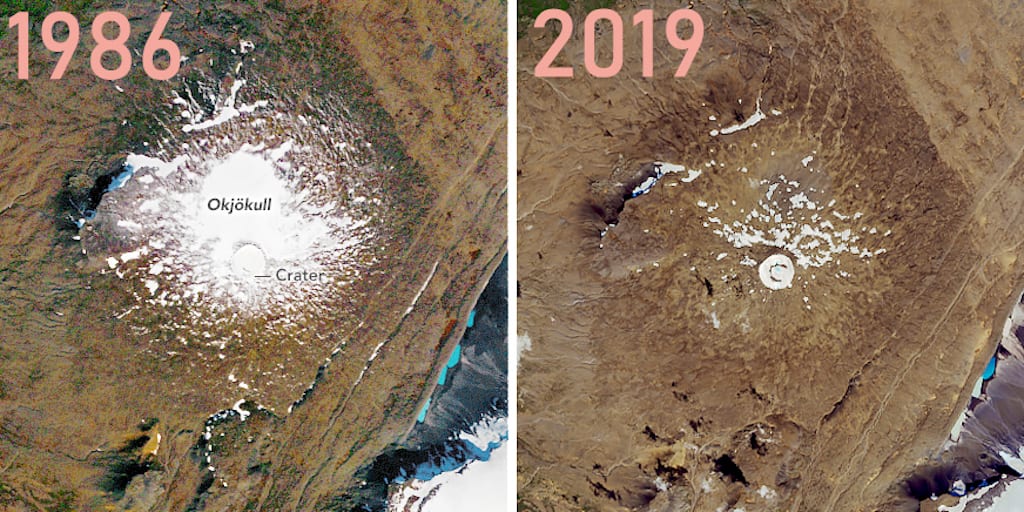 We’re losing to global warming and Mother Nature is not impressed.

The glacier was declared dead in 2014 and its glacier tag, jökull, was dropped subsequently as a volcano shield is what finally remained.

The situation is pretty grim and the plaque inscribed by Andri Snaer Magnason reads:

“Ok is the first Icelandic glacier to lose its status as a glacier. In the next 200 years all our glaciers are expected to follow the same path. This monument is to acknowledge that we know what is happening and what needs to be done. Only you know if we did it.”

The memorial also recorded the number 415ppm CO2: referring to the highest level of carbon dioxide measured in the atmosphere last May.

Around 100 people including researchers, leaders, and renowned activists attended the funeral.

“I hope this ceremony will be an inspiration not only to us here in Iceland but also for the rest of the world, because what we are seeing here is just one face of the climate crisis,” Jakobsdottir told AFP.

Renowned anthropologist Cymene Howe from Rice University said: “This will be the first monument to a glacier lost to climate change anywhere in the world,”

“By marking Ok’s passing, we hope to draw attention to what is being lost as Earth’s glaciers expire. These bodies of ice are the largest freshwater reserves on the planet and frozen within them are histories of the atmosphere. They are also often important cultural forms that are full of significance.”

Iceland is presently covered in about 10% of ice and loses about 11bn tonnes of it per year, and scientists fear all of the island’s 400-plus glaciers will be gone by 2200.

Increased climate changes caused by fossil fuel incineration, and release of other potent greenhouse gases are causing glaciers not only in Iceland but also around the world to melt, increasing sea levels, and deepening the climate crisis; which is why environmentalists want the world to start paying heed now!

How grave is global warming according to you? Tell us in the comments section below.