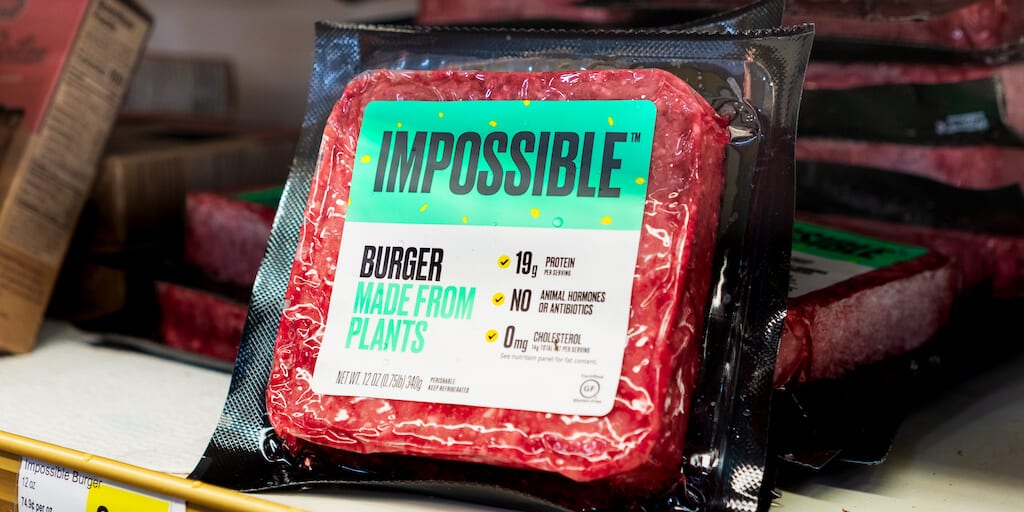 “We can replace yesterday’s ridiculous, animal-based technology with a categorically better way of transforming plants into meat.”

Impossible Foods has launched its first television advertising campaign “We Are Meat” to target meat-eaters.

The campaign—which will also run on digital and social media platforms—has five short television ads that show the Impossible Burger sizzling on a grill.

It has been created to challenge the notion that meat must come exclusively from animals to taste delicious.

Produced by Portland, Ore.-based Wieden+Kennedy, the message across each commercial is that Impossible Burger, which contains no animal ingredients, is meat for meat lovers — made from plants.

According to reports, nine out of 10 people eating the Impossible Burger are meat-eaters.

“We can replace yesterday’s ridiculous, animal-based technology with a categorically better way of transforming plants into meat. And we can do it with zero compromise on taste, nutrition, convenience, or family traditions.”

Currently, Impossible products are in about 20,000 grocery stores and 30,000 restaurants, with up to 82% of sales coming at the direct expense of animal-derived products.

Jessie Becker, the Senior Vice President of Marketing for Impossible Foods added: “Once people try Impossible Burger they are blown away by its taste. But consumers are skeptical based on years of sub-par experiences with conventional, plant-based products.

“We built this campaign to introduce Impossible products to consumers nationwide as delicious meat — no qualifications or compromises needed.”

The food tech giant which produces synthetic meat products using soy and other plants is among a handful of global start-ups dedicated to developing meat alternatives using biological or genetic technologies.

According to the CEO, the soaring popularity of plant-based foods amid growing concerns about the sustainability of meat production and the environmental impact of the livestock industry will soon lead to the end of animal meat within the next 15 years.

And Impossible Foods is gearing up for the transition by doubling its research team to help the company continue to develop products that will make consumers “vote with their stomachs.” This includes improving current products and launching new ones.

Last year, it revealed working on creating dairy-identical vegan milk that will ‘function and behave just like the animal-derived version’.