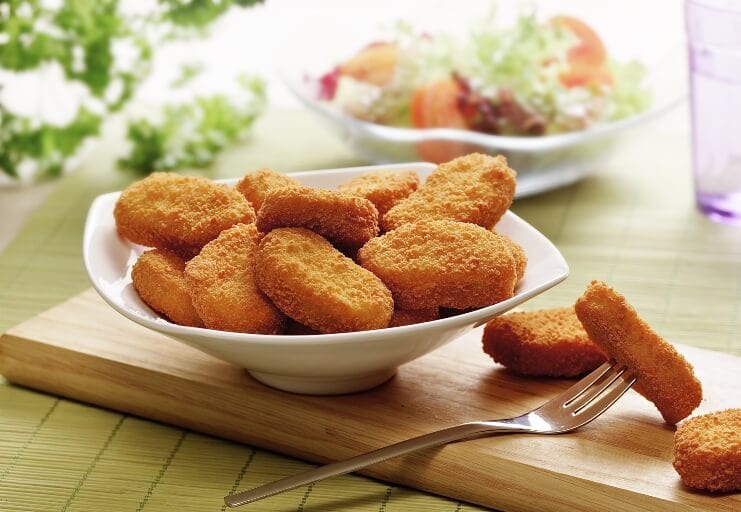 The nuggets are made from texturized soy and sunflower oil and will take on Beyond Meat’s recently launched chicken tenders.

Impossible Foods has announced it will launch plant-based chicken nuggets this fall.

The US plant-based meat producer’s first vegan chicken product will be coming first to the restaurants before heading to supermarkets and schools.

However, customers will be able to test the products at DOT Foods’ trade show happening next week.

The Impossible nuggets are made from texturized soy and sunflower oil and mimic the taste and texture of regular nuggets.

They have been in the pipeline ‘for some time’ since the company has ‘been busy with other things’, according to Impossible President Dennis Woodside.

Apart from catering to the foodservice market, the nuggets can be a great option for Impossible Foods to add to school menus after it achieved Child Nutrition [CN] accreditation from the United States Department of Agriculture [USDA] in May.

The certification allows Impossible Foods to serve its products across K-12 schools in the US.

The plant-based meat company is well on its mission to replace every animal-derived food with viable plant-based alternatives within the next 14 years.

In a recent conference, CEO Pat Brown said: “Our mission is to completely replace the use of animals as a food technology by 2035. We’re dead serious about it and we believe it’s doable.

“I was confident that we would succeed when I launched this company, and now I’m completely confident. It’s game over for the incumbent [meat] industry—they just don’t realize it yet.”

Impossible Foods and Beyond Meat

The two companies are the world’s two most prominent plant-based meat producers and will be battling to consolidate their positions as market leaders in a burgeoning vegan chicken nugget market, which is expected to reach $1.8 trillion by 2040.

Beyond Meat recently announced the release of its Beyond Chicken Tenders to 400 restaurants, pubs, bars, and classic wing stops, as well as vegan chains across the US.

In addition, Panda Express will test a vegan version of its famed orange chicken created in partnership with Beyond Meat starting 26 July.