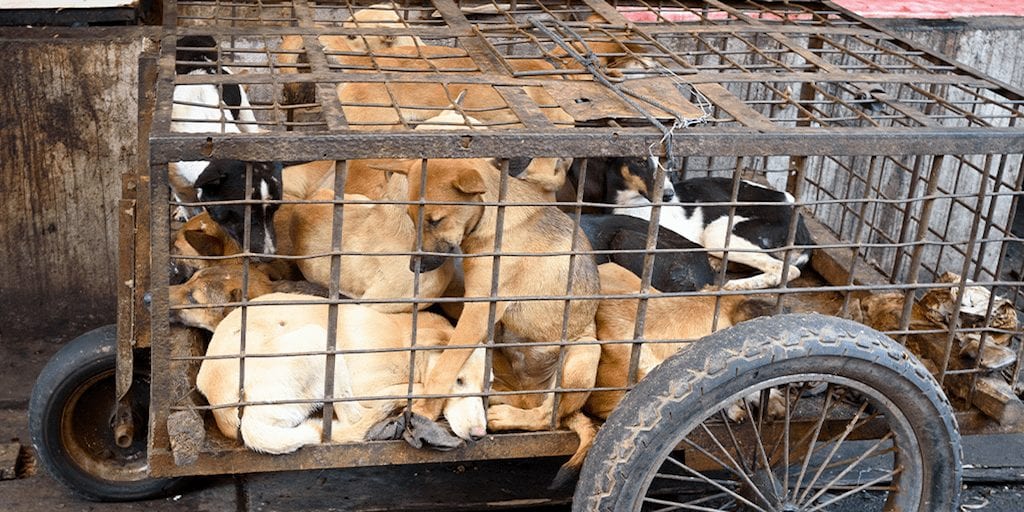 An Indonesian province is set to enforce a ban on dog meat consumption in a groundbreaking moment for animal rights in the country.

Central Java Governor Ganjar Pranowo made the announcement in a meeting with activists – which will make waves in a country with a thriving dog meat market.

Animal rights activists have been piling pressure of the industry and have celebrated a major victory.

Prawano met with welfare group Dog Meat Free Indonesia this month and agreed to a ban on consuming dog meat, according to The Jakarta Post.

After the Dog Meat Free Indonesia coalition’s meetings with Indonesian politicians we can confirm that the local government wants to pledge “zero tolerance” of the trade!

“Just consume meats that are meant to be consumed. Beef and chicken meat taste better,” he said.

The Governor acknowledged a law introduced in 2012 which said that dogs are not a legitimate food source, saying the law ‘clearly prohibits’ the trade – suggesting the industry will be clamped down on.

The movement has been supported by a star-studded list of celebrities who have condemned the trade.

Cameron Diaz, Ellen DeGeneres, Ricky Gervais signed a letter which said the country would be ‘celebrated’ if the dog meat industry was eradicated.

Dog meat is only consumed by a small percentage of people in Indonesia and public opinion is turning against the industry in some areas – particularly among young people.

But the trade is still a huge business and slaughters thousands of innocent animals across the country every month.

On the Indonesian island of Sulawesi, one man goes to extreme lengths to protect the dogs he loves.

Frank Delano Manus runs a sanctuary for dogs and cats which he rescues from slaughter despite fierce opposition and outrage from parts of the community.

Frank has regularly faced threats and even attacks from the local community who view dog meat as an important part of their culture.

But Frank persisted despite the abuse, and he continued to campaign on the streets with a firm belief that his message of compassion would eventually get through.

“After that, a lot of people actually started to sympathize with our cause and join our movement, especially after they learned that we were also locals. In the end, we gained their respect and tolerance,” he told Vice.

What is the best way to promote a plant-based lifestyle? Share your thoughts in the comments section below!