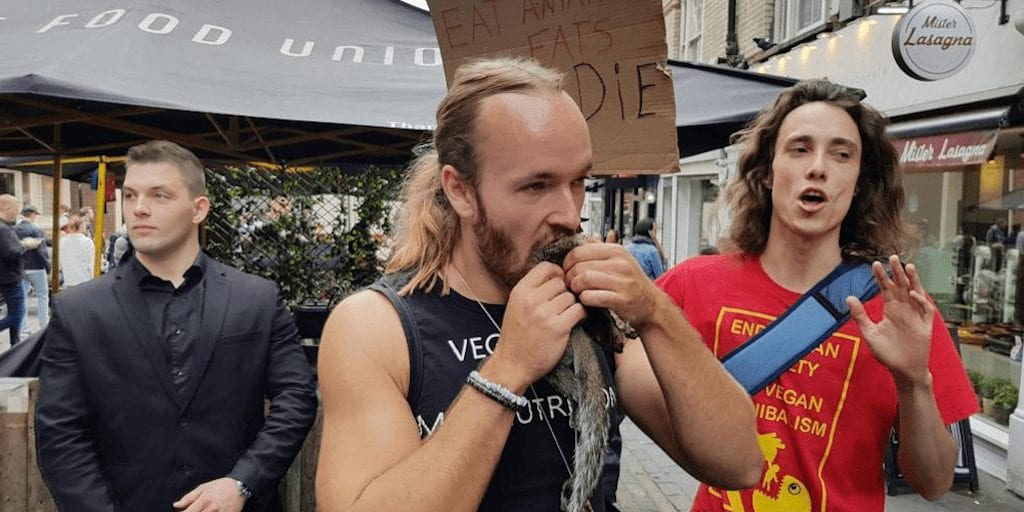 Two anti-vegan activists have been convicted of public order offences and fined after eating raw squirrel outside a vegan food stall at Soho Vegan Food Market.

Deonisy Khlebnikov, 22, and Gatis Lagzdins, 29, also known as YouTuber “Sv3rige”, were joined by a small crowd of protesters and filmed eating the dead animal to a horrified reaction from bystanders, who could be heard to shout “what the f**k are you doing?”

Lagzdins, who has more than 70,000 subscribers online – over 123,000 fewer than vegan activist Earthling Ed – wore a shirt reading “VEGANISM = MALNUTRITION”, and a dead woodcock bird hung from his neck.

After the police were alerted, the pair were arrested and led away in handcuffs.

At the trial last month, jurors heard from witnesses who described the stunt as “sick”, and recalled that one young boy with autism became visibly distressed.

Lagzdins did not appear at the trial, and was convicted and sentenced in absentia.

A desperate ploy for attention

This is far from the first of Lagzdins’ raw flesh-eating stunts. He has been filmed at a small vegan cafe in Shoreditch, from which he was ejected by management, and appeared at Brighton VegFest eating a raw pig’s head.
After the Soho Market stunt, he was roundly mocked on social media and even applauded for having inadvertently promoted veganism.

“Deonisy Khlebnikov and Gatis Lagzdins claimed they were against veganism and were raising awareness about the dangers of not eating meat when they publicly consumed raw squirrels,” Natalie Clines, from the Crown Prosecution Service, said.

“By choosing to do this outside a vegan food stall and continuing with their disgusting and unnecessary behavior despite requests to stop, including from a parent whose child was upset by their actions, the prosecution was able to demonstrate that they had planned and intended to cause distress to the public.

“Their premeditated actions caused significant distress to members of the public, including young children.”

Lagzdins was fined £400, while Khlebnikov was fined £200, and both men were ordered to pay prosecution costs at £310 each.

What do you think of the court’s verdict and fine? Share your thoughts in the comments below!