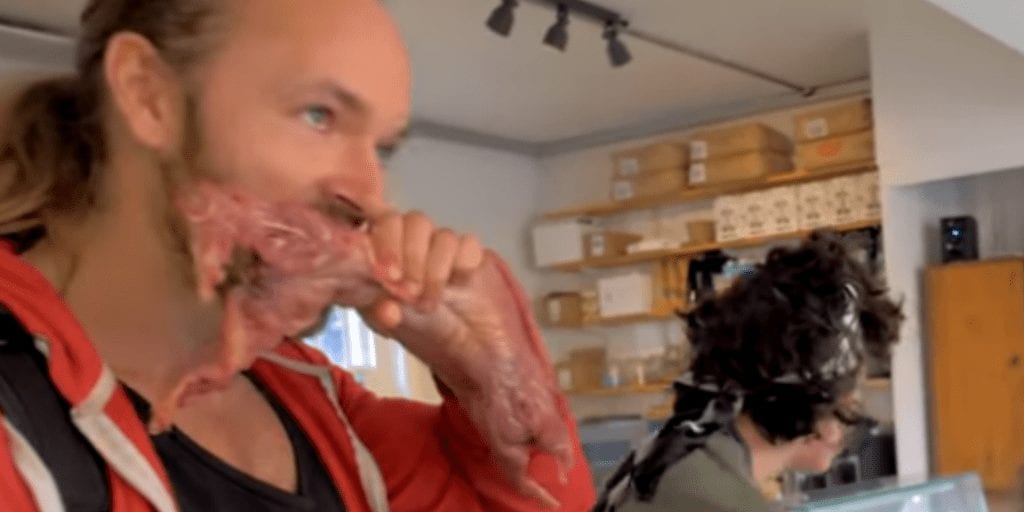 Infamous anti-vegan protester Sv3rige has taken his demonstrations up a notch by targeting a small cafe in London where he ate raw meat and scuffled with employees.

The protester walked into Essential Vegan in Shoreditch, casually sat down at a table and began eating a skinned squirrel.

Sv3rige was accompanied by other vegan-haters for support, who were confronted by the cafe’s owner Vanessa Almeida,

She told the group: “You are in a restaurant for vegans.

But Sv3rige and his accomplices were not satisfied with the stunt, which they filmed and uploaded to YouTube, and they began to hurl abuse at the employees.

They preached that vegans are ‘mentally ill’ and accused them of ‘retarding the human race’.

One protester said: “In November, Vegans went to a meat eaters restaurant and screamed at them. We are being very nice.”

When asked to leave the building, Sv3rige argues that ‘vegans do the same thing to meat eaters’.

After a scuffle, Sv3rige claims he was ‘assaulted by vegans for eating meat’.

Another protester adds ‘the owner of the place looks paler than an albino’ and shouts ‘your brain is fraying on your diet. You’re mentally ill. You’re retarding the human race’.

Sv3rige used to be vegan himself before making a dramatic lifestyle switch.

Last month he started an anti-vegan tour of the UK, which has involved eating a raw squirrel at a vegan market and a raw pigs head at Brighton VegFest.

But his stunts have largely backfired, as meat eaters have been just as disgusted by his actions, and some have even reported being turned vegan after witnessing Sv3rige’s demonstrations.

What do you think of Sv3rige’s protests? Tell us in the comments below!