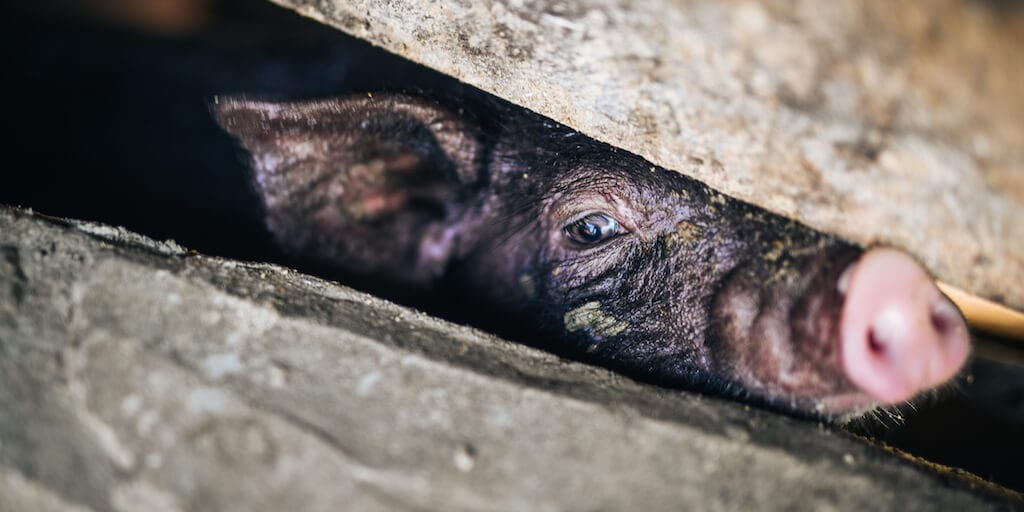 The campaigners hid cameras in Calvesley – a breeding facility and Whiteshoot -a fattening and finishing centre, both of which belong to Winterbrook Farm Partners.

Victims of bullying and cannibalism

Some of the animals lying in segregated pens were covered in lacerations and grotesque bites and injuries.

The team said the situation at Calvesley Farm was even more distressing.

In one of the scenes captured by the campaigners, a farm worker is seen killing young piglets by ‘knocking’ and slamming their tiny heads onto the concrete floor. After the barbaric behaviour, the worker dumps the bodies aside because these animals are presumably considered too small to be of value.

Ironically, both farms carry the Red Tractor seal of approval, an industry body which claims all of their farmers’ ‘animals have been well cared for’.

The investigation also revealed workers carrying out routine mutilations on-site. It showed workers ruthlessly pulling out each newborn piglet from its stall and using a barbaric hot knife to snip the piglets’ tails and a pair of pliers to clip away their teeth without any local anaesthetics.

According to the animal welfare group, workers engage in these cruel acts “to prevent tail biting, a behaviour that manifests from distress and lack of stimulation.”

The group also uncovered a large incinerator stowed away in an open-ended shed at Calvesley Farm.

While incinerators are a common sight on factory farms to dispose of dead animals, sick or spent animals. The footage showed workers cramming corpses into the furnace, including sows, piglets and afterbirth.

There was also a heap of dead piglets surrounding the furnace in various stages of rot, covered in maggots and others dumped on the ashes of previous burns with the shed doors wide open to let wild animals such as pheasants and foxes feast on the remains.

The group highlighted that the practices seen at the farms were in complete violation of the government’s guidance, which states that other animals and birds should not be able to access the carcass.

It described the state of the farms as “disgraceful” and added that the horrific conditions seen on the farms in the midst of a global pandemic was all the more shocking as it easily allowed for infections to spread and mutate.

Founder and Director of Viva!, Juliet Gellatley said: “Our team witnessed appalling conditions in this investigation, documenting the systematic abuse of farmed pigs, whose short lives are filled with nothing but misery and pain…all for the sake of food.

“This investigation reiterates the fact that supermarket welfare claims and regulatory bodies such as Red Tractor are nothing but a façade for the horrendous, brutal and cruel reality of intensive factory farming in this country.”

Gellatley added that the farms in question were “not aberrant farms” but what is typically seen in most farms under government and retailer surveillance.

“I think the customers of Morrisons will be disgusted to see the conditions on these farms,” she continued.

She stressed that factory farms not only raise serious welfare concerns but also “create an ideal environment for mutating viruses and antibiotic-resistant superbugs”.

“Our relationship with animals can no longer be just focused on exploitation, the way meat is produced is now considered to be a global threat. It’s not just a case of banning wet markets, although that can’t come soon enough. We need to stop factory farming too and are calling on consumers to choose vegan,” she concluded.

In response to the damning evidence of animal torture and abuse, a spokesperson for Red Tractor said: “We were very disappointed by some of the images in the footage.

”Protecting animal health and welfare is one of our top priorities. Red Tractor requires all members to meet every standard, every day and take any allegations of breaches seriously.

“We immediately launched an investigation and as a result, the farms’ Red Tractor Certifications have been suspended and sanctions put in place to address the issues raised through this process.”

Share this story to reveal the barbaric nature of factory farming.