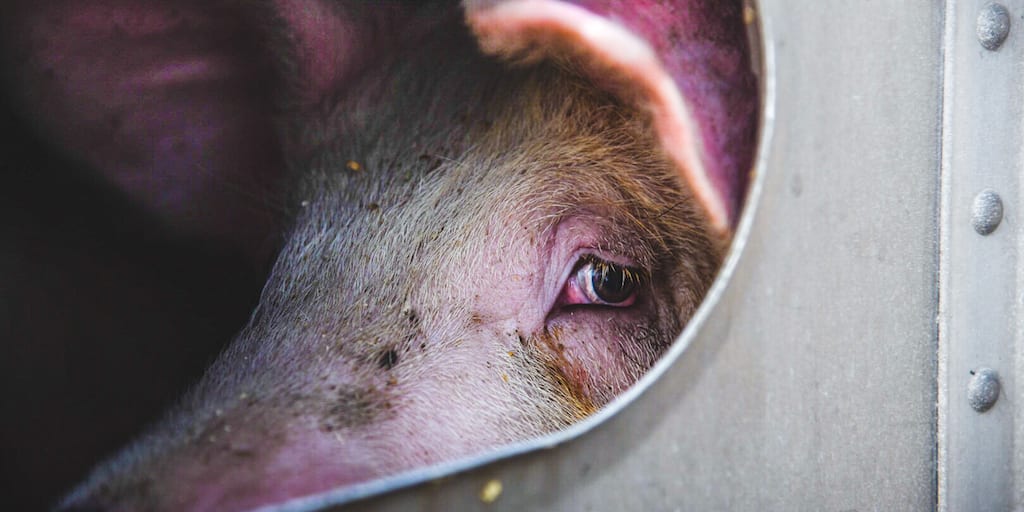 Animal rights activists in Northern Ireland have secured the release of a pig who was set for slaughter after a standoff with a farmer which lasted for several hours.

The ‘Meat the Victim’ activists arrived at the pork farm at 4.30am in Ballymena, County Antrim and occupied the farm, demanding a pig should be released after discovering a horrific scene of neglect and abuse.

The group shared pictures of shocking conditions for animals which they say were at the farm.

They posted a series of images showing pigs with open wounds and infections, and shared an image of a room filled with ‘dead babies everywhere’.

After hours of negotiations, they secured one pig’s release. They have now named him Connor and transferred him to an animal sanctuary, where he will live out the rest of his life.

The group shared a video on social media which shows the pig being removed from the farm.

“Connor was liberated yesterday during the Meat The Victims Northern Island” the group wrote.

The group thanked ‘activists who stood in solidarity yesterday, risked arrest to capture the truth to share with the world for the animals’.

The Department of Agriculture, Environment and Rural Affairs has launched an investigation due to the images activists released of the poor conditions allegedly at the farm.

“DAERA inspectors followed up on the incident today and are currently investigating,” the spokesperson told the Belfast Telegraph.

“The department is responsible under the Welfare of Animals Act (NI) 2011 in respect of farmed animals.”

Local police told the Belfast Telegraph that they were aware of a protest ‘involving a number of people at a farm in the Cloughmills area’.

“Police attended and spoke with the protesters who left the property shortly before 7am.

“There were no reports of any criminal offence during the incident”.

According to reports, a policeman was required to choose the pig to be freed as negotiations took place.

What do you think of the activists’ protests? Share your thoughts in the comments section below!