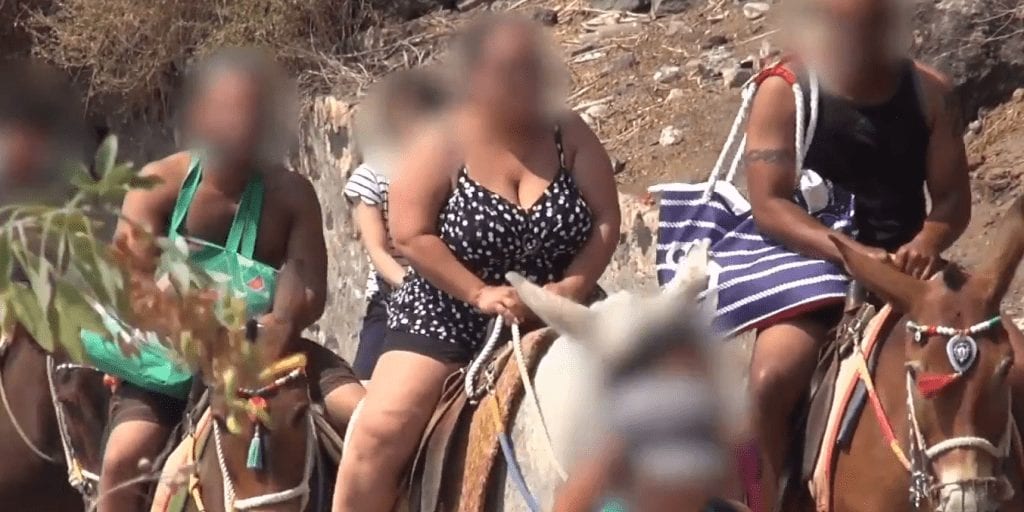 An eyewitness exposé has revealed the horrific conditions donkeys and mules endure every day on the Greek island of Santorini.

Video footage shows handlers dragging animals down the steps, whipping and hitting them with sticks to make them continue walking.

The investigation from PETA was launched amid a campaign to stop the practice.

The animal welfare group explained in a statement sent to Totally Vegan Buzz that a new law passed this year prevents owners from burdening their donkeys with weights exceeding 100 kilograms.

But according to veterinary recommendations, donkeys shouldn’t carry more than 20% of their body weight – approximately 50 kilograms.

Ahead of his upcoming performance at the Release Athens festival (16 June), The Smiths icon Johnny Marr has appealed to Greek Minister of Tourism Thanasis Theocharopoulos to put an end to cruel animal “taxi” rides in Santorini.

In the letter, Marr points out that, as exposed by PETA, donkeys and mules are forced to transport tourists – many of whom are British – up more than 500 steep steps, several times a day, from the port to the old town of Firá.

When not being made to carry extremely heavy loads on their backs, they’re often tethered in the blazing sun without access to water or shade. He goes on to urge the minister: “Please, put an end to this old-school practice of using animals as ‘beasts of burden’ and encourage tourists to use the port’s cable car – or their own two feet – Instead.”

What do you think of donkey rides in Santorini? Share your thoughts in the comments below!