Investigation reveals monkeys screaming out in pain at German lab 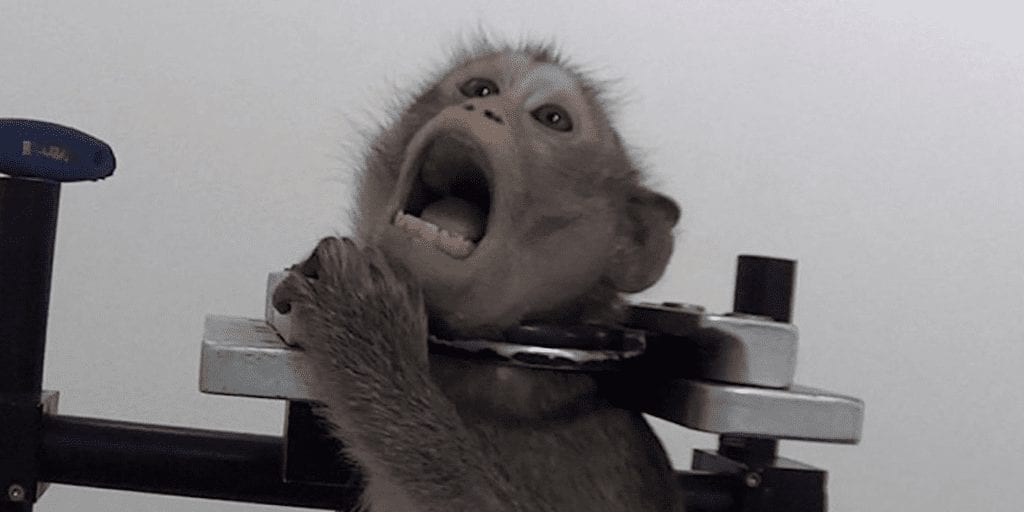 Harrowing footage has emerged from a testing lab in Germany, in which animals are subjected to horrific abuse and monkeys are seen screaming out in pain.

Activists from Cruelty Free International (CFI) took undercover footage at the Laboratory of Pharmacology and Toxicology (LPT) near Hamburg.

Dogs are seen kept in horrendous conditions and monkeys are subjected to ‘barbaric’ procedures in video footage which has sparked demands for a change to EU laws.

The investigation, which was completed by CFI in partnership with Soko Tierschutz, shows workers with metal prongs grabbing monkeys by the throat and restraining them to allow the lab to carry out invasive tests.

Workers are pictured treating the animals with disdain – they are handled ‘violently’ and one is seen having its head smashed against a door frame.

Highly stressed monkeys are seen in a frenzied state inside tiny cages and others are made to stand uncomfortably for long periods.

Dogs and cats are also pictured in appalling conditions at the site. Some dogs are left lying in their own blood and faeces, while cats are clearly mistreated and a beagle is seen bleeding in a cage.

Campaigners have demanded action from authorities following the investigation.

Kate Willett, of Humane Society International, said in a statement to The Guardian: “The technicians are treating the animals violently,” she said. “This kind of treatment is ethically insupportable and quite possibly illegal.

“Each country develops its own animal care guidelines, but dogs housed in these appalling conditions would not be up to the standards of the US or the UK, and it has serious ramifications for the quality of the scientific results.

“It’s time for this type of testing to be relegated to the history bin.

“There are new, non-animal methodologies available for safety testing so to see this type of abuse going on in in the name of science in the 21st century is unforgivable.”

This is not the first time the lab has come under pressure from animal rights groups, as former investigations have revealed monkeys being kept in tiny cages.

Soko’s Friedrich Mülln said: “It is unthinkable that this should be happening in a country that has animal protection in its constitution.

“We call on the German government to take immediate action to close LPT and to end these cruel and outdated poisoning tests.”

A spokesperson said: “The veterinary office responded promptly, after we were informed of the video footage, which indicates significant maladministration in the LPT facility, and carried out a comprehensive and unannounced inspection.

“For this reason, the Harburg district has filed criminal charges with the prosecutor. We regret that animals have suffered as a result of noncompliant husbandry conditions and will consistently remedy all identified grievances … with all legally available means.

“The challenge for the competent authorities is to examine what is and is not allowed under current legislation on animal testing and animal husbandry.”

Share this article to reveal the reality of animal testing.