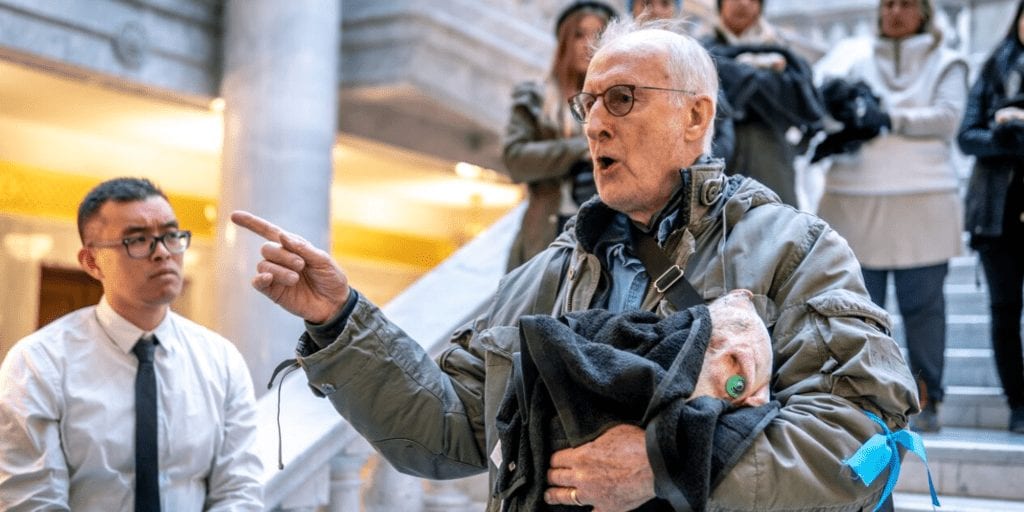 Actor James Cromwell stormed into the Utah State Capitol building holding a dead piglet in a protest against animal cruelty.

The actor was joined by 200 Direct Action Everywhere (DxE) activists to demand action from the governor and attorney general in response to alleged animal cruelty at Smithfield’s Circle Four Farms in Milford, Utah.

Cromwell, who turned vegan in 1995 after starring in the film Babe, held a dead piglet allegedly recovered from the farm by anonymous whistleblowers.

In a statement sent to Totally Vegan Buzz, he said: “It’s a question of heart. Do you have the heart and compassion to see this creature as something viable in this world? Like any other sentient being?

Three children also pleaded with officers and the company to release a single baby pig.

The group approached the office of the attorney general, but there was no response. They proceeded to the governor’s office, which was guarded by a pair of police officers.

As activists gathered outside the office, Michael Mower, governor Herbert’s deputy chief of staff, said he would share the activists’ concerns with the governor, who could choose to review the situation.

The dramatic confrontation was caught on Facebook livestream  by DxE.

Following the demonstration, Cromwell and the activists drove to Circle Four Farms.

DxE described the events: “They demanded that management open the doors to allow activists to inspect conditions and provide care to animals in need.

“At least ten police officers were waiting when activists arrived. Smithfield staff did not meet or communicate with the activists.”

The demonstration was also attended by DxE founder Wayne Hsiung.

“We’re simply asking for a conversation around Smithfield’s stated values of transparency and being a so-called ‘leader in animal care’,” Hsiung said.

Animal cruelty protesters are often not taken seriously. What do you think about James’s protest? Let us know in the comments below!