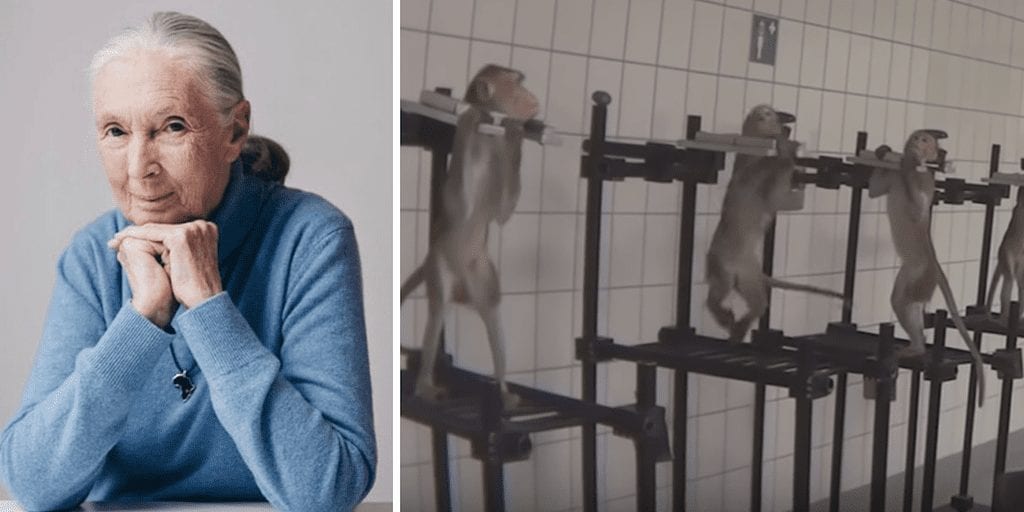 Conservationist Jane Goodall has lambasted a German laboratory for its inhumane practices on lab animals, and has called for testing methods to be abolished.

Footage recovered from the Laboratory of Pharmacology and Toxicology (LPT), a contract testing laboratory near Hamburg, Germany that conducts toxicity testing for global pharmaceutical, industrial and agrochemical companies, revealed horrific and brutal treatment of animals.

After seeing the footage, Jane Goodall DBE, Founder of the Jane Goodall Institute and UN Messenger of Peace, said: “The footage shows some of the worst abuse I’ve ever seen on testing with animals.

“Some of the monkeys were lying huddled on the wire floor of their tiny prisons, while others showed stereotypic behavior, turning in circles, pacing fast, back and forth indicative of extremely high levels of stress. Some cowered at the approach of a human showing pronounced fear response and sometimes screaming.

“Each monkey had a metal collar around the neck. Some shots showed monkeys forced to stand upright, legs tied together, and arms outstretched, virtually crucified. One shot showed a monkey’s mouth being forced open while a tube was pushed down into the stomach and liquid injected into the tube.

“The overall impression left by this film footage suggests that their treatment means nothing less than systematic abuse for these animals. The footage has not been made in a small, obscure enterprise operating, far away from any legal regulations, in a remote corner of the world,” she continued.

In summary, what I have seen in this video is some of the most callous, inhumane, and brutal behavior by humans towards the primates, dogs, and cats kept at this laboratory. It is nothing but living hell. Such a situation does not belong in the 21st century and must be stopped.

“No more invasive biomedical testing should be performed on sentient and complex animals like primates, dogs and cats. Even rats have been proved highly intelligent and capable of feeling fear and pain. Animals can’t talk for themselves, so we need to be their voices and bring their plight out into the daylight,” she added.

Acknowledging Dr. Goodall, Michelle Thew CEO of Cruelty Free International said: “No one is more respected than Jane in the world of animal protection. We are of course delighted that with all her experience and knowledge, Jane has spoken out for the animals suffering at LPT.”

According to Cruelty Free International, the local public prosecutor’s office has initated ‘a preliminary investigation for animal cruelty against LPT’ after the horrifying footage exposed the plight of the animals.

Also, the Lower Saxony Office for Consumer Protection and Food Safety (LAVES) has filed criminal charges and the local veterinary authority has convicted LPT for the size of the cages in which 44 of the monkeys were housed.

The organization feels that the footage does not warrant only an investigation and strict action should be taken to put an end to malpractices in animal lab testing.

“We hope that the authorities will take notice and act now to both close this particular facility and urgently review toxicity testing on animals in Germany and in the European Union as a whole,”  Thew added.

Cruelty Free International’s Director of Science, Dr. Katy Taylor, added: “We, and millions of concerned people from within Germany and across the world, believe this laboratory must close.

“The breaches in legislation, the appalling levels of suffering, the cruelty, the poor conditions, and practices resulting in further animal suffering are unacceptable.

“We, therefore, call on the Lower Saxony Ministry of Agriculture to close this laboratory and to immediately instigate a rehoming strategy for the animals held there, that will provide a secure and better future for all of them.”

To this effect, Cruelty Free International initiated  a campaign asking the European Commission for an urgent and fundamental review of animal testing in Europe. The petition has garnered 47,488 signatures so far.

What other measures should authorities take to stop animal cruelty? Share your thoughts in the comments section below!