Joaquin Phoenix reveals reason he went vegan as a child, and it's incredibly powerful | Totally Vegan Buzz
Skip to content 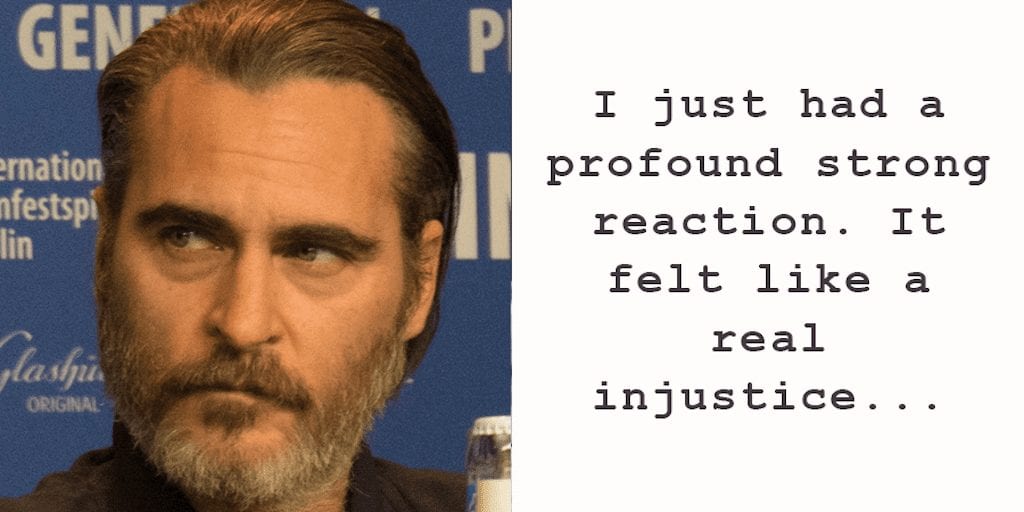 Actor Joaquin Phoenix has been vegan since he was three years old and is a huge animal rights activist. He leads annual global marches through major cities, and last week he even stopped off at a protest on his way to winning an award at Toronto Film Festival. But where did it all begin for this passionate ally to animals?

As the plant-based movement explodes, for many vegans the journey starts later in life thanks to shocking documentaries, such as Cowspiracy or Dominion, which reveal the truth behind the meat and dairy industries.

But for Phoenix, it all started when veganism was a blip on the radar compared to today.

In the 1970s when the actor was only 3 years old, he had a profound experience which made him ditch animal products for good.

In an interview with Collider, Phoenix revealed:

“Really it was seeing these fish being killed when I was on a boat as a kid. I guess to stun them they were throwing them against the side of the boat. I just had a profound strong reaction. It felt like a real injustice. It wasn’t just me, it was my siblings, all of my siblings, except for the youngest, Summer, she wasn’t born. My mom was pregnant with her. I don’t know how to explain it. I think it made me distrustful, and angry, and frightened of humans, humanity. I just thought it was such a gross abuse of power in a way. I think that during that moment we knew that we were not going to eat meat anymore. We said to our parents, “Why didn’t you tell us?” It’s amazing. I remember my mom’s face, I remember her crying. She didn’t know how to answer. It became very obvious we weren’t going to eat meat anymore.”

Last week The ‘Joker’ actor dropped by St George Subway Transit Station on his way to the Toronto Film Festival awards to support the BeFairBeVegan ad campaign and pose in front of the group’s billboards.

BeFairBeVegan was hosting an event inside the subway, which is covered in striking pro-vegan messages such as ‘Imagine being born to be caged’.

After the event, Anita Krajnc, member of vegan activist group Toronto Pig Save, said: “He’s so busy, the only window he had was 3 to 5 p.m. today and he has this big award, yet he took time out to come see BeFairBeVegan Toronto because it’s so close to his heart.

“He’s going to change the world for us and we’re so happy to have him here.”

March for the victims

Earlier this year Phoenix spearheaded a global march in which activists carried the dead bodies of animals which were taken from factory farms.

He was pictured carrying an animal through Los Angeles in an eye-catching demonstration.

Chickens, lambs, pigs and many other animals were carried through the streets of London, Paris, Mumbai and other iconic cities across the world.

How influential can Joaquin Phoenix’s activism be? Share your thoughts in the comments section below!