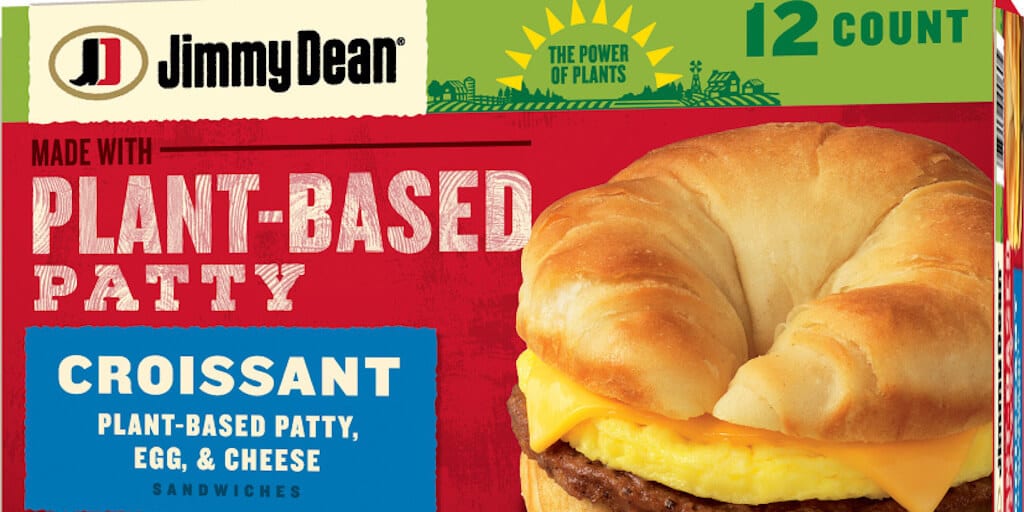 “Plant-based foods are revolutionizing the way people eat across meal occasions, including breakfast.”

According to Jimmy Dean, owned by Tyson Foods, the new plant-based breakfast options are targeted at the growing flexitarian American population, who are trying to incorporate more plant-based foods along with their meat staples.

“As the protein breakfast leader, expanding our portfolio to provide people with alternative choices was critical.

“We also had to deliver the same signature flavor and quality people expect from the Jimmy Dean brand with our new sandwiches, and we’re excited for both our lifelong and new fans to try them.”

The croissant sandwich is now available at Sam’s Club while the frittata sandwich will launch at retailers nationwide this spring.

This isn’t the first-time meat giant Tyson has served up a meat alternative. In 2019, the brand released a burger blended with meat and pea protein in addition to plant-based nuggets under the Jimmy Dean product line.

The plant-based meat market has been growing in popularity for health, animal welfare, and environmental reasons and major food corporations including Smithfield Foods, Perdue, Hormel Foods and Nestle have released their own plant-based labels to lure the crowd.

Fast-food chains have also started adding meat-free options made available by the likes of companies like Beyond Meat and Impossible foods to their menus in recent years.

In 2o19, it became the first US restaurant to offer the Beyond Breakfast Sausage.

Burger King introduced its meatless Impossible Whopper that same year. Today, it launches a new vegan burger in the UK for Veganuary.

International fast-food chain McDonald’s is also expected to roll out its new McPlant sandwich in some markets this year.

The brand’s new line will also reportedly include chicken substitutes and burgers.

Share this story to let others know of Jinny Dean’s plant-based patties.