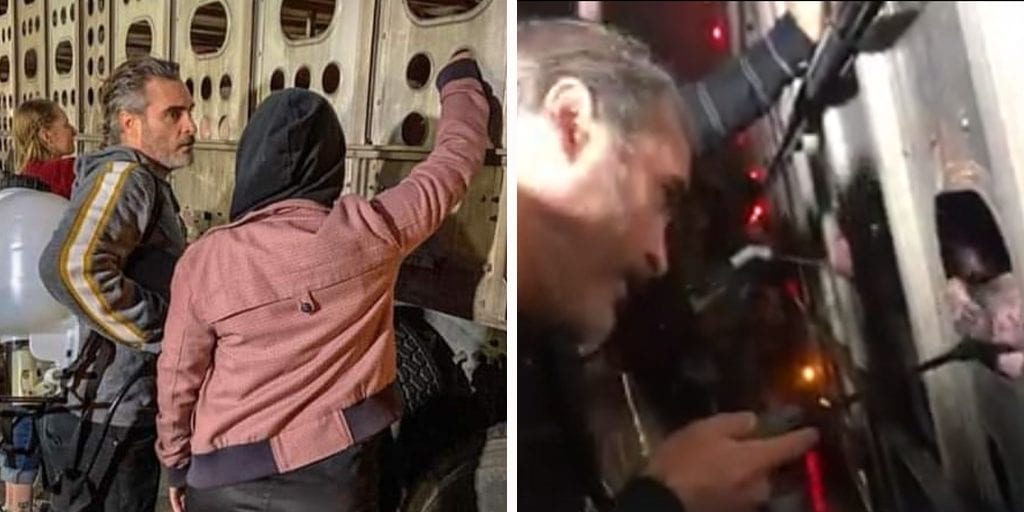 Vegan actor Joaquin Phoenix has been pictured saying goodbye to pigs and other animals on their way to the slaughterhouse.

The Joker star was pictured at a vigil held by the Animal Alliance Network trying to comfort the doomed animals and giving them some water in their last moments.

Hundreds of activists attended the vigil this month to pay respects to slaughterhouse victims, and it was also filmed by NBC.

Animal Alliance Network works alongside Los Angeles Animal Save to hold regular events, and both are part of the worldwide Animal Save Movement.

Laetitia Cerboneschi posted a picture of Phoenix on Facebook, writing: “In front of a Los Angeles Slaughterhouse to give some water to the animals that will die. #Govegan”

This isn’t the first time the actor has been pictured at animal vigils, and last year the Los Angeles Animal Save group posted a video of Phoenix giving pigs water at an event.

Phoenix is an active animal rights campaigner having been vegan since he was a young child.

In a recent interview in the buildup to the release of Joker, he condemned meat eating, describing farming practices as ‘absurd’ and ‘barbaric’.

“Me and my siblings witnessed fish being killed in a really violent and aggressive way,” he said.

The actor also wore an Animal Liberation Front jumper at the premiere of the new Joker film this month.

The ALF is an organisation which fights to end speciesism, and often hits the headlines for rescuing animals from slaughterhouses, organising veterinary services and setting up sanctuaries.

And last month he featured on a PETA billboard campaign that promoted veganism and condemned speciesism.

He also participated in the Be Fair Be Vegan campaign in Toronto, where he led a protest against animal cruelty at the St George Subway Transit Station that was covered with posters detailing the abuse of animals in the meat industry.

What influence can vegan celebrities have on animal rights? Share your thoughts in the comments section below!