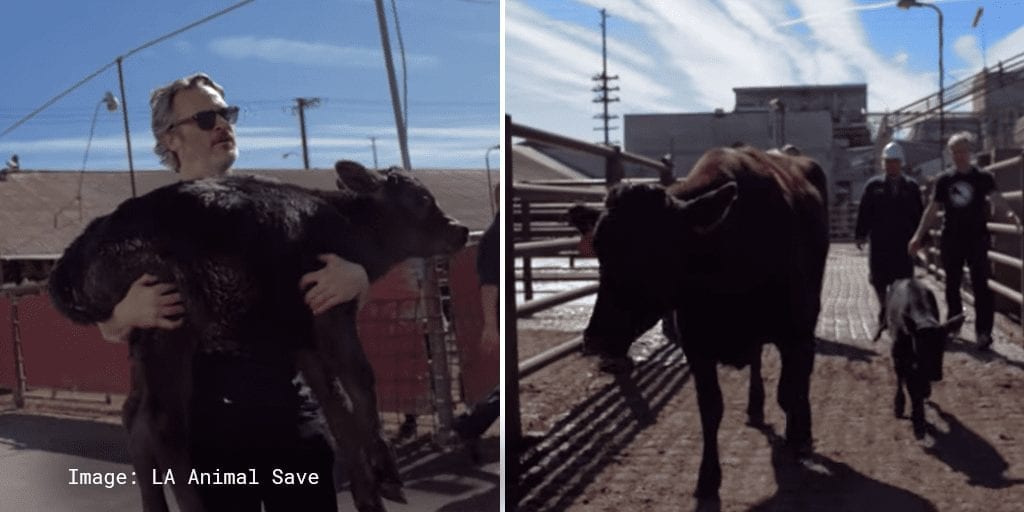 Joaquin Phoenix has been filmed rescuing a cow and her week-old calf from a Los Angeles slaughterhouse just hours after he delivered a rousing speech that slammed the dairy industry.

It took Joaquin Phoenix just a day after his Oscar-best actor speech to show the world he practices what he preaches.

An 8-minute video filmed by Los Angeles Animal Save, shows the Hollywood star’s meeting with a slaughterhouse boss in a tour arranged by the animal advocacy group.

While Phoenix and the CEO of the Pico Rivera slaughterhouse, Anthony di Maria debated on the welfare practices adopted by the animal industry, the slaughterhouse boss assured the vegan actor that he never separated newborns from their mothers.

In fact, he said that a mother cow had just delivered a calf a week ago and they were living together on the grounds.

The CEO also magnanimously agreed to allow Phoenix to move the mother and baby to the sanctuary, an act which the team insists was not a planned part of the tour.

The Joker star is then seen leaving the premises cradling the calf, who he named Indigo while he named the mother Liberty. The pair is loaded onto the Farm Sanctuary truck to be taken away from the slaughterhouse.

L.A. Animal Save has already rescued four pairs of  mother and calves from Manning Beef that are now living peacefully at the Farm Sanctuary.

Happy with the rescue, Phoenix said in a statement released with the  video: “I never thought I’d find friendship in a slaughterhouse, but meeting Anthony and opening my heart to his, I realize we might have more in common than we do differences.

“Without his act of kindness, Liberty and her baby calf, Indigo, would have met a terrible demise.”

He continued saying: “Although we will continue to fight for the liberation of all animals who suffer in these oppressive systems, we must take pause to acknowledge and celebrate the victories, and the people who helped achieve them.”

“My hope is, as we watch baby Indigo grow up with her mom Liberty at Farm Sanctuary, that we’ll always remember that friendships can emerge in the most unexpected places; and no matter our differences, kindness and compassion should rule everything around us,” he concluded.

The actor’s impromptu rescue act resonates with the concluding part of his Oscar speech in which he said: “Human beings at our best are so creative and inventive, and we can create, develop and implement systems of change that are beneficial to all sentient beings and the environment.”

Surely the actor’s late brother would be pleased to see Phoenix act on the lines penned by the lyricist: “Run to the rescue with love and peace will follow.”

Share this heartwarming video to celebrate the happiness of Liberty and Indigo as they begin their new lives at the sanctuary.