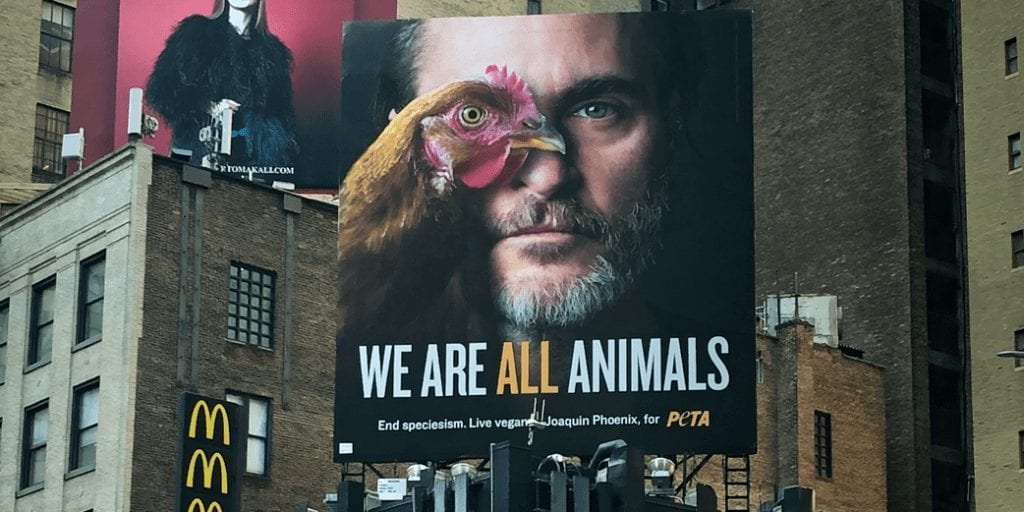 The vegan actor is pictured in a striking image from PETA beside a chicken, with the ad declaring “We Are All Animals”.

The billboard urges passers-by to “live vegan” and help “end speciesism”, which PETA defines as ‘the damaging belief that – despite their extraordinary talents, abilities, and intelligence – all other animal species are inferior to humans’.

“When we look at the world through another animal’s eyes, we have to realise that, inside, we’re all the same – and so we all deserve to live free from suffering,” says Phoenix in a statement sent to Totally Vegan Buzz.

His vegan plea comes amidst a PETA campaign informing people that cattle ranchers are burning the Amazon rainforest to meet the global demand for meat.

More than 90% of the rainforest that’s been cleared since 1970 is used for meat production, either for grazing or for growing food for cattle, PETA explained.

The United Nations states that animal agriculture is responsible for nearly a fifth of human-induced greenhouse-gas emissions – and warns that a global shift to vegan eating is necessary to combat the worst effects of climate change.

In addition to significantly reducing their contribution to the climate crisis, every person who goes vegan spares the lives of nearly 200 animals each year and helps shut down speciesism. PETA asks people to combat this harmful worldview by not only choosing vegan foods but also staying away from animal circuses, avoiding personal-care products that were tested on animals, and rejecting all other forms of exploitation of animals.

Recently, Phoenix wore a vegan suit in a giant anti-wool PETA US ad that proclaimed, “Cruelty Doesn’t Suit Me”.

He also stopped off at a subway station to lead a vegan advertising campaign on his way to winning an award at Toronto Film Festival earlier this month.

The billboard is located at the intersection of Seventh Avenue and West 40th Street.

How influential are PETA’s ad campaigns? Share your thoughts in the comments section below!