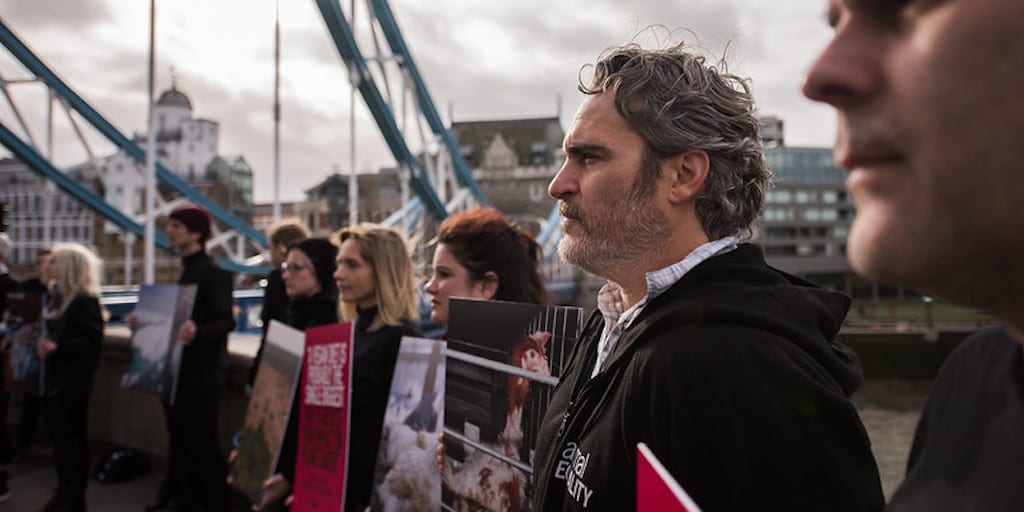 Joaquin Phoenix led an animal rights protest in London to encourage people to eat plant based for the climate while admitting to the hypocrisy of the entertainment industry.

The 45-year-old actor and ‘Joker’ star joined Members of Animal Equality to protest at London’s Tower Bridge on February 2 before going on to win the best actor gong at the 73rd British Film and Television Arts (BAFTA) Awards.

Phoenix along with members of the group lowered a 390-square-foot banner from the bridge that declared, “Factory farming is destroying our planet. Go vegan”.

“When you witness the horror that really happens behind closed doors and slaughterhouses to farmed animals all over the world, it’s impossible not to be affected by it and to realize that we have to do something drastic to stop it,” he said.

“I’m just doing my part and trying to amplify the voice of these activists that are out every day, doing something, taking action, and the least I can do is take some time off today and come here to talk about this issue.”

A passionate animal rights activist, Phoenix has been a vegan since age 3 and this was just of the many protests and campaigns led by him.

In a previous event, he attended a pig vigil organized by the Los Angeles Animal Save group right after he won best actor for his role in “Joker” at the 26th annual Screen Actors Guild (SAG) Awards.

“Joaquin Phoenix—still in his tux—came to the vigil tonight. Congrats to him on his SAG award for Best Male Actor in a Leading Role! We are so grateful for all you do for the animals,” wrote the group.

Sharon Núñez, President of Animal Equality said: “Joaquin’s dedication to animals and the environmental cause is extraordinary, he sees the absolute need for us to have serious conversations around the devastation that factory farming is having on animals, our planet, and our health.”

Acknowledging the double standards of the entertainment industry, Sky News reported the vegan actor stating: “We are all hypocrites in some ways. We all struggle with what the right thing to do is and we make mistakes.

“The industry does consume a lot of power and a lot of resources so the way to mitigate that for me is to maintain a vegan lifestyle.

“I think that is part of our appeal to the award ceremonies because there are so many people flying in to the awards and the cars they use – the one thing they can do is to make the meal plant-based,” he added.

According to insiders, Phoenix convinced the Hollywood Foreign Press Association that manages the Golden Globes, to serve its first all-vegan menu at the ceremony last month.

“Like everyone, we are increasingly concerned about the impact of climate change,” said Bafta chair Pippa Harris, “and it just feels like we can no longer do nothing. That is just not acceptable.”

At the protest, Phoenix told Sky News: “People are not in a panic in the way they should be. These are very dire times and so I felt like I had to do something.

“We have a personal responsibility to take action right now.

“One way we can mitigate climate change is by adjusting our consumption and by going plant based. I feel sometimes that’s not being talked about enough.

“This is an emergency. We have to do everything we can to try to cut down our impact on climate change.”

“A vegan diet is one of the best ways to reduce our impact on the planet—by changing what we eat, we can change the course of our future,” added Núñez.