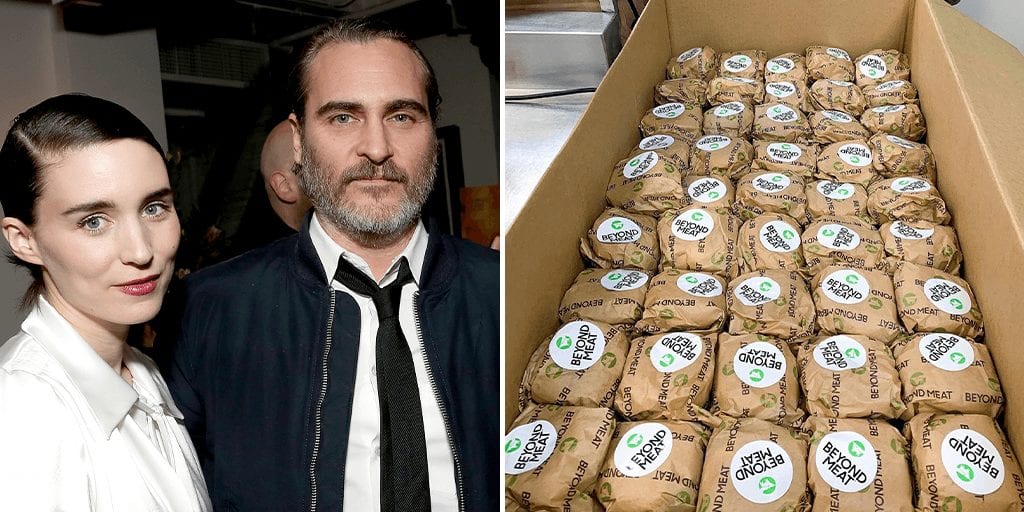 Image: Wikimedia Commons and Beyond Meat

The vegan power couple has joined Beyond Meat’s Feed A Million+ campaign to provide meals to three nonprofits of their choice.

Quarantining in their LA home, Phoenix and Mara released a short clip to reveal that they had joined Beyond Meat’s Feed a Million+ cause, which the  plant-based food start up has been running since April 6.

The couple has chosen to donate the meals to 3 LA organizations: Midnight Mission, Urban School Food Alliance and My Friend’s Place.

In the clip shared by The Hollywood Reporter, the multiple award-winning actor said: “We’re so grateful to partner with Beyond Meat’s Feed a Million campaign to support individuals and communities experiencing food insecurity.”

“For the next several weeks, the Feed a Million campaign will be donating hundreds of hot meals to some of our favorite organizations that provide emergency services to so many people,” Mara added.

The couple then thanked Beyond Meat for the initiative and all the essential workers and volunteers around the country, who are at the frontline of the crisis.

Phoenix and Mara join several other celebrities and sportspersons, who have already thrown their weight behind the cause.

Beyond Meat investor and ambassador, Snoop Dogg announced he had joined the campaign to donate burgers to hospitals.

In a post on Instagram, he wrote: “Beyond Meat has made a pledge to donate over one million Beyond Burgers to those in need during these challenging times.

“I’m proud to be a part of it.” Snoop Dogg selected Martin Luther King Jr. Community Hospital in Southern Los Angeles as his organization of choice.”

Comedian Kevin Hart uploaded a video on Instagram to make the announcement.

He said: “I want to give a shout-out to my partners in crime over there at Beyond Meat. You guys are unbelievable, feeding over a million people right now through these crazy times is a must. I love the fact that you’ve stepped up and I want to do my part as your partner, I want to step-up as well.”

“Seeing the effects of COVID-19 reach our loved ones, our schools, our jobs, and access to food has really impacted me,” he captioned his Instagram post.

Deandre Jordan, Ashanti, Ludacris, Lindsey Vonn, P.K. Subban, Erin Andrews and Karlie Kloss are some of the other famous personalities to have contributed to the cause.

Share this story to support Beyond Meat’s FEED A MILLION+ campaign.